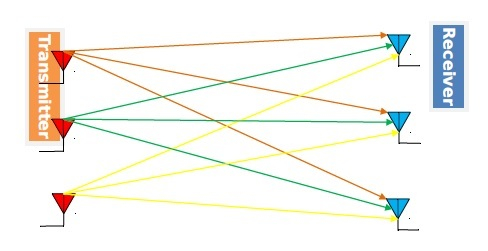 In traditional wireless communication systems, a single antenna is used at the transmitter site, and another single antenna is used at the receiver site. This may give rise to multipath effects. Multipath effects arise when obstructions in the line of propagation scatters communication waves, due to which the source signal takes multiple paths to reach the destination. The scattered portions of the signal arrives late and causes transmission problems like fading, intermittent reception, reduction in data speed, more errors etc. When two or more antennas are used, the trouble caused by multipath wave propagation is eliminated. The signals received by antennas at the receiver site are combined to generate a more accurate signal.

The possible area of applications of MIMO technology are −