Multimedia is an interactive media and provides multiple ways to represent information to the user in a powerful manner. It provides an interaction between users and digital information. It is a medium of communication.Some of the sectors where multimedias is used extensively are education, training, reference material, business presentations, advertising and documentaries.

By definition Multimedia is a representation of information in an attractive and interactive manner with the use of a combination of text, audio, video, graphics and animation. In other words we can say that Multimedia is a computerized method of presenting information combining textual data, audio, visuals (video), graphics and animations. For examples: E-Mail, Yahoo Messenger, Video Conferencing, and Multimedia Message Service (MMS).

Multimedia as name suggests is the combination of Multi and Media that is many types of media (hardware/software) used for communication of information. 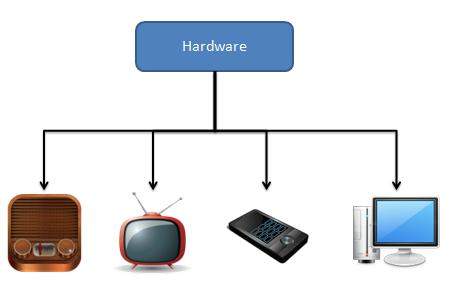 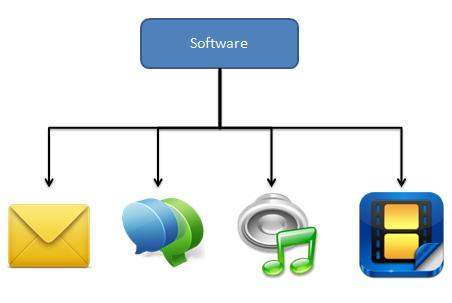 Following are the common components of multimedia:

Following are the common areas of applications of multimedia.

Following are the various categories of Multimedia software

Multimedia applications are created with the help of following mentioned tools and packages.

The sound, text, graphics, animation and video are the integral part of multimedia software. To produce and edit these media elements, there are various software tools available in the market. The categories of basic software tools are:

Multimedia authoring is a process of assembling different types of media contents like text, audio, image, animations and video as a single stream of information with the help of various software tools available in the market. Multimedia authoring tools give an integrated environment for joining together the different elements of a multimedia production. It gives the framework for organizing and editing the components of a multimedia project. It enables the developer to create interactive presentation by combining text, audio, video, graphics and animation.

Card or Page based authoring tools

In these authoring systems, elements are organized as pages of a book or a stack of cards. In the book or stack there are thousand of pages or cards available. These tools are best used when the bulk of your content consists of elements that can be viewed individually, for example the pages of a book or file cards in card file. You can jump from page to page because all pages can be interrelated. In the authoring system you can organize pages or cards in the sequences manner. Every page of the book may contain many media elements like sounds, videos and animations.

One page may have a hyperlink to another page that comes at a much later stage and by clicking on the same you might have effectively skipped several pages in between. Some examples of card or page tools are:

Following are the advantages of card based authoring tools.

Following are the disadvantages of card based authoring tools.

Icon-based tools give a visual programming approach to organizing and presenting multimedia. First you build a structure or flowchart of events, tasks and decisions by dragging appropriate icons from a library. Each icon does a specific task, for example- plays a sound, open an image etc. The flowchart graphically displays the project's logic. When the structure is built you can add your content text, graphics, animation, video movies and sounds. A nontechnical multimedia author can also build sophisticated applications without scripting using icon based authoring tools. Some examples of icon based tools are:

Following are the advantages of icon/event based authoring tools.

Following are the disadvantages of icon/event based authoring tools.

Time based authoring tools allow the designer to arrange various elements and events of the multimedia project along a well defined time line. By time line, we simply mean the passage of time. As the time advances from starting point of the project, the events begin to occur, one after another. The events may include media files playback as well as transition from one portion of the project to another. The speed at which these transitions occur can also be accurately controlled. These tools are best to use for those projects, wherein the information flow can be directed from beginning to end much like the movies. Some example of Time based tools are:

Following are the advantages of time based authoring tools.

Following are the disadvantages of time based authoring tools.

Object oriented authoring tools support environment based on object. Each object has the following two characteristics:

An image consists of a rectangular array of dots called pixels. The size of the image is specified in terms of width X height, in numbers of the pixels. The physical size of the image, in inches or centimeters, depends on the resolution of the device on which the image is displayed. The resolution is usually measured in DPI (Dots Per Inch). An image will appear smaller on a device with a higher resolution than on one with a lower resolution. For color images, one needs enough bits per pixel to represent all the colors in the image. The number of the bits per pixel is called the depth of the image.

A color loop-up table (LUT) is a mechanism used to transform a range of input colors into another range of colors. Color look-up table will convert the logical color numbers stored in each pixel of video memory into physical colors, represented as RGB triplets, which can be displayed on a computer monitor. Each pixel of image stores only index value or logical color number. For example if a pixel stores the value 30, the meaning is to go to row 30 in a color look-up table (LUT). The LUT is often called a Palette.

Characteristic of LUT are following:

A common example would be a palette of 256 colors that is the number of entries is 256 and thus each entry is addressed by an 8-bit pixel value. Each color can be chosen from a full palette, with a total of 16.7 million colors that is the each entry is of 24 bits and 8 bits per channel which sets the total combinations of 256 levels for each of the red, green and blue components 256 x 256 x 256 =16,777,216 colors.

Digitization is a process of converting the analog signals to a digital signal. There are three steps of digitization of sound. 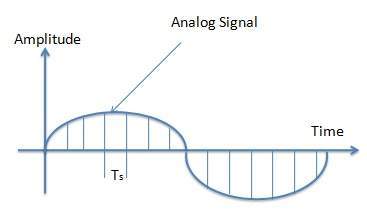 Quantization is a process to assign a discrete value from a range of possible values to each sample. Number of samples or ranges of values are dependent on the number of bits used to represent each sample. Quantization results in stepped waveform resembling the source signal. 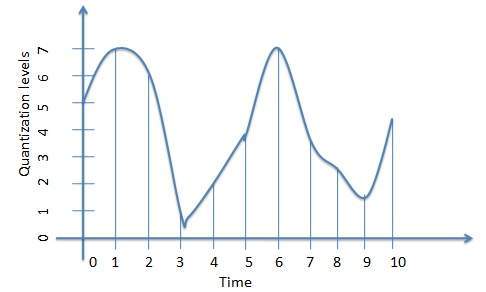 In order to send the sampled digital sound/ audio over the wire that it to transmit the digital audio, it is first to be recovered as analog signal. This process is called de-modulation. 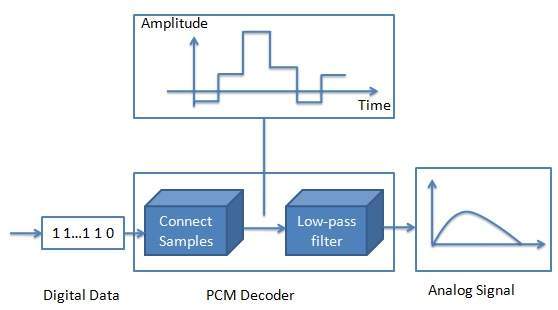 Audio coding is used to obtain compact digital representations of high fidelity audio signals for the purpose of efficient transmission of signal or storage of signal. Objective in audio coding is to represent the signal with minimum number of bits while achieving transparent signal reproduction that is generating output audio that cannot be distinguished from the original input.

PCM is a method or technique for transmitting analog data in a digital and binary way independent of the complexity of the analog waveform.All types of analog data like video, voice; music etc. can be transferred using PCM. It is the standard form for digital audio in computers. It is used by Blu-ray, DVD and Compact Disc formats and other systemds such as digital telephone systems. PCM consists of three steps to digitize an analog signal.

On the scale of 0...255, those numbers are reasonably large. They are quite similar to each other. Differences are taken and coded instead of complete numbers. Normally first number is taken as such and then differences are computed.

Thus coding string of numbers is

When decoding this string of numbers, start with the first number and start adding the deltas to get the remaining numbers:

Therefore, audio is not stored in simple PCM but in a form that exploits differences.

Predictive coding is based on the principle that most source or analog signals show significant correlation between successive samples so encoding uses redundancy in sample values which implies lower bit rate. Therefore, in case of predictive coding, we have to predict current sample value based upon previous samples and we have to encode the difference between actual value of sample and predicted value. The difference between actual and predicted samples is known as prediction error. Therefore, predicting coding consists of finding differences and transmitting these using a PCM system.

Assume that input signal (or samples) as the set of integer values fn. Then we predict integer value f¯n as simply the previous value. Therefore

fn=f¯n
Let en is prediction error (i.e the difference between the actual and the predicted signal).
en=fn-f¯n

We would like our error value en to be as small as possible. Therefore we would wish our pprediction fn to be as close as possible to the actual signal fn.

But for a particular sequence of signal values, more than one previous values fn-1,fn-2,fn-3 and so on may provide a better prediction of fn

f¯n is the mean of previous two values. Such a predictor can be followed by a truncating or rounding operation to result in integer.

DPCM is exactly the same as predictive coding except that it incorporates a quantizer step.

DPCM algorithm predicts the next sample based on the previous samples and the encoder stores only the difference between this prediction and the actual value. When prediction is reasonable, lesser bits are required to represent the same information. This type of encoding reduces the number of bits required per sample by about 25% compared to PCM.

Nomenclature for different signal values is as follows:

The equations that describe DPCM are as follows:

Note that the predictor is always based on the reconstructed, quantized version of the signal because encoder side is not using any information. If we try to make use of the original signal fn in the predictor in place of f´n then quantization error would tend to accumulate and could get worse rather than being centered on zero.

The figure shows the schematic diagram for the DPCM encoder (transmitter).

We observed the following point for this figure

DPCM coder has two components, namely the quantizer and the predictor. In Adaptive Differential Pulse Code Modulation (ADPCM), the quantizer and predictor are adaptive. This means that they change to match the characteristics of the speech (or audio) being coded.

ADPCM adapts the quantizer step size to suit the input. In DPCM, step size can be changed along with decision boundaries, using a non uniform quantizer. There are two ways to do this

However, we find a different situation, if we try to change the prediction coefficients which multiply previous quantized values to make a complicated set of equations to solve for these cofficients. Figure shows a schematic diagram for the ADPCM encoder and decoder. 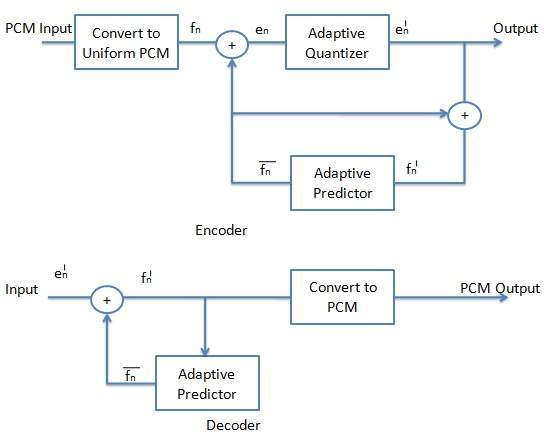