Modelling is the process of representing a model which includes its construction and working. This model is similar to a real system, which helps the analyst predict the effect of changes to the system. In other words, modelling is creating a model which represents a system including their properties. It is an act of building a model.

Following are the steps to perform simulation analysis.

Following are the advantages of using Modelling and Simulation −

Following are the disadvantages of using Modelling and Simulation −

Additionally, it is used to study the internal structure of a complex system such as the biological system. It is used while optimizing the system design such as routing algorithm, assembly line, etc. It is used to test new designs and policies. It is used to verify analytic solutions.

In this chapter, we will discuss various concepts and classification of Modelling.

Following are the basic concepts of Modelling & Simulation.

The system state variables are a set of data, required to define the internal process within the system at a given point of time.

Following are some of the system state variables −

A system can be classified into the following categories. 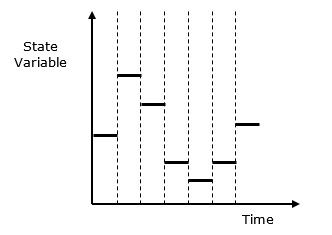 Continuous system is affected by the state variable, which changes continuously as a function with time. Its behavior is depicted in the following graphical representation. 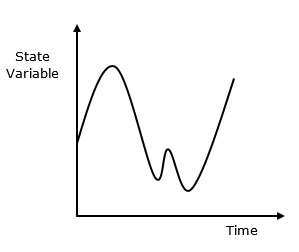 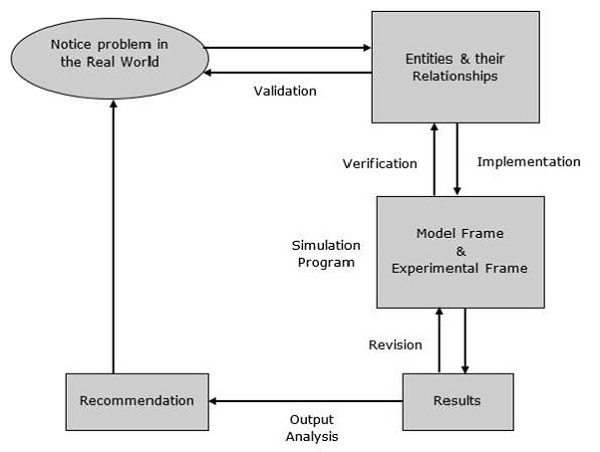 Step 1 − Examine the problem. In this stage, we must understand the problem and choose its classification accordingly, such as deterministic or stochastic.

Step 2 − Design a model. In this stage, we have to perform the following simple tasks which help us design a model −

One of the real problems that the simulation analyst faces is to validate the model. The simulation model is valid only if the model is an accurate representation of the actual system, else it is invalid.

Validation and verification are the two steps in any simulation project to validate a model. 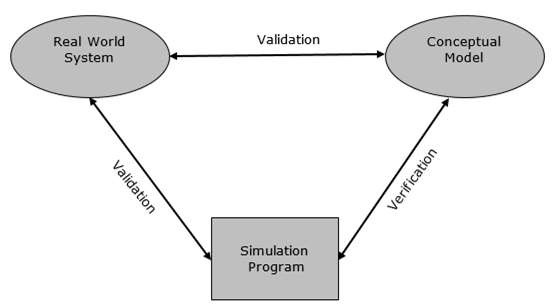 There are various techniques used to perform Verification & Validation of Simulation Model. Following are some of the common techniques −

Following are the ways to perform verification of simulation model −

Step 1 − Design a model with high validity. This can be achieved using the following steps −

Step 2 − Test the model at assumptions data. This can be achieved by applying the assumption data into the model and testing it quantitatively. Sensitive analysis can also be performed to observe the effect of change in the result when significant changes are made in the input data.

Step 3 − Determine the representative output of the Simulation model. This can be achieved using the following steps −

After model development, we have to perform comparison of its output data with real system data. Following are the two approaches to perform this comparison.

In this approach, we use real-world inputs of the model to compare its output with that of the real-world inputs of the real system. This process of validation is straightforward, however, it may present some difficulties when carried out, such as if the output is to be compared to average length, waiting time, idle time, etc. it can be compared using statistical tests and hypothesis testing. Some of the statistical tests are chi-square test, Kolmogorov-Smirnov test, Cramer-von Mises test, and the Moments test.

Consider we have to describe a proposed system which doesn’t exist at the present nor has existed in the past. Therefore, there is no historical data available to compare its performance with. Hence, we have to use a hypothetical system based on assumptions. Following useful pointers will help in making it efficient.

Following is the graphical representation of the behavior of a discrete system simulation. 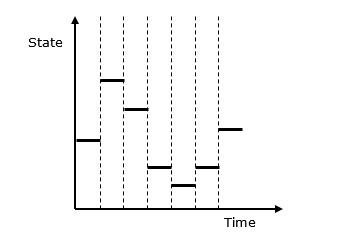 Discrete event simulation is generally carried out by a software designed in high level programming languages such as Pascal, C++, or any specialized simulation language. Following are the five key features −

Every system depends on a time parameter. In a graphical representation it is referred to as clock time or time counter and initially it is set to zero. Time is updated based on the following two factors −

Simulation of a Queuing System

A queue is the combination of all entities in the system being served and those waiting for their turn.

Following is the list of parameters used in the Queuing System.

This is the simplest queuing system as represented in the following figure. The central element of the system is a server, which provides service to the connected devices or items. Items request to the system to be served, if the server is idle. Then, it is served immediately, else it joins a waiting queue. After the task is completed by the server, the item departs.

As the name suggests, the system consists of multiple servers and a common queue for all items. When any item requests for the server, it is allocated if at-least one server is available. Else the queue begins to start until the server is free. In this system, we assume that all servers are identical, i.e. there is no difference which server is chosen for which item.

Time-sharing system is designed in such a manner that each user uses a small portion of time shared on a system, which results in multiple users sharing the system simultaneously. The switching of each user is so rapid that each user feels like using their own system. It is based on the concept of CPU scheduling and multi-programming where multiple resources can be utilized effectively by executing multiple jobs simultaneously on a system.

It is designed by Stanford University to study the complex computer hardware designs, to analyze application performance, and to study the operating systems. SimOS contains software simulation of all the hardware components of the modern computer systems, i.e. processors, Memory Management Units (MMU), caches, etc.

A continuous system is one in which important activities of the system completes smoothly without any delay, i.e. no queue of events, no sorting of time simulation, etc. When a continuous system is modeled mathematically, its variables representing the attributes are controlled by continuous functions.

What is Continuous Simulation?

Continuous simulation is a type of simulation in which state variables change continuously with respect to time. Following is the graphical representation of its behavior. 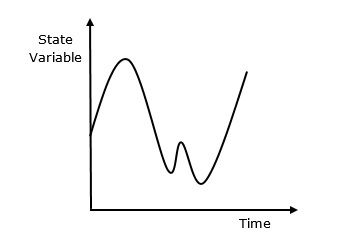 Why Use Continuous Simulation?

We have to use continuous simulation as it depends on differential equation of various parameters associated with the system and their estimated results known to us.

Continuous simulation is used in the following sectors. In civil engineering for the construction of dam embankment and tunnel constructions. In military applications for simulation of missile trajectory, simulation of fighter aircraft training, and designing & testing of intelligent controller for underwater vehicles.

Monte Carlo simulation is a computerized mathematical technique to generate random sample data based on some known distribution for numerical experiments. This method is applied to risk quantitative analysis and decision making problems. This method is used by the professionals of various profiles such as finance, project management, energy, manufacturing, engineering, research & development, insurance, oil & gas, transportation, etc.

This method was first used by scientists working on the atom bomb in 1940. This method can be used in those situations where we need to make an estimate and uncertain decisions such as weather forecast predictions.

Following are the three important characteristics of Monte-Carlo method − 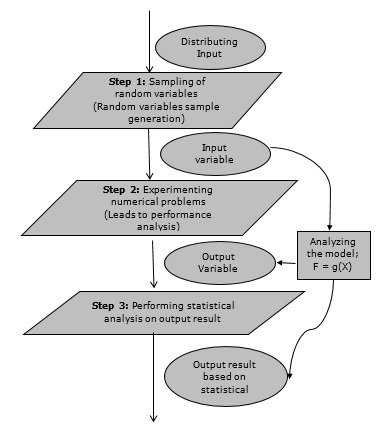 The objective of the database in Modelling & Simulation is to provide data representation and its relationship for analysis and testing purposes. The first data model was introduced in 1980 by Edgar Codd. Following were the salient features of the model.

The latest concept for data modeling is the object-oriented design in which entities are represented as classes, which are used as templates in computer programming. A class having its name, attributes, constraints, and relationships with objects of other classes.

A simulation event has its attributes such as the event name and its associated time information. It represents the execution of a provided simulation using a set of input data associated with the input file parameter and provides its result as a set of output data, stored in multiple files associated with data files.

Every simulation process requires a different set of input data and its associated parameter values, which are represented in the input data file. The input file is associated with the software which processes the simulation. The data model represents the referenced files by an association with a data file.

When the simulation process is completed, it produces various output files and each output file is represented as a data file. Each file has its name, description and a universal factor. A data file is classified into two files. The first file contains the numerical values and the second file contains the descriptive information for the contents of the numerical file.

Neural network is the branch of artificial intelligence. Neural network is a network of many processors named as units, each unit having its small local memory. Each unit is connected by unidirectional communication channels named as connections, which carry the numeric data. Each unit works only on their local data and on the inputs they receive from the connections.

The first neural model was developed in 1940 by McCulloch & Pitts.

In 1949, Donald Hebb wrote a book “The Organization of Behavior”, which pointed to the concept of neurons.

In 1950, with the computers being advanced, it became possible to make a model on these theories. It was done by IBM research laboratories. However, the effort failed and later attempts were successful.

In 1959, Bernard Widrow and Marcian Hoff, developed models called ADALINE and MADALINE. These models have Multiple ADAptive LINear Elements. MADALINE was the first neural network to be applied to a real-world problem.

In 1962, the perceptron model was developed by Rosenblatt, having the ability to solve simple pattern classification problems.

When traditional artificial intelligence techniques involving symbolic methods failed, then arises the need to use neural networks. Neural networks have its massive parallelism techniques, which provide the computing power needed to solve such problems.

Neural network can be used in speech synthesis machines, for pattern recognition, to detect diagnostic problems, in robotic control boards and medical equipments.

What is a Fuzzy Set?

In a classical set, an element is either a member of the set or not. Fuzzy sets are defined in terms of classical sets X as −

Case 1 − The function μA(x) has the following properties −

Any value with a membership grade of zero doesn’t appear in the expression of the set.

The following figure depicts the relationship between a fuzzy set and a classical crisp set. 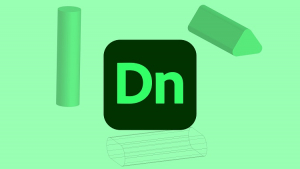 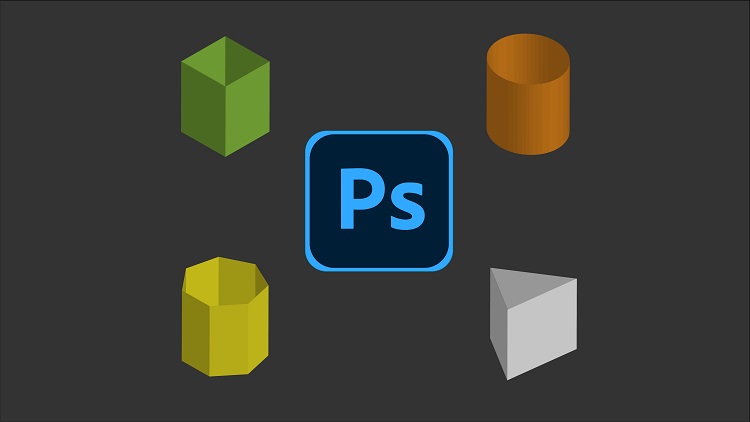 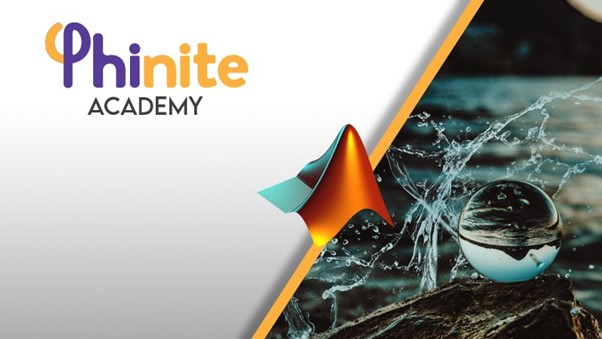 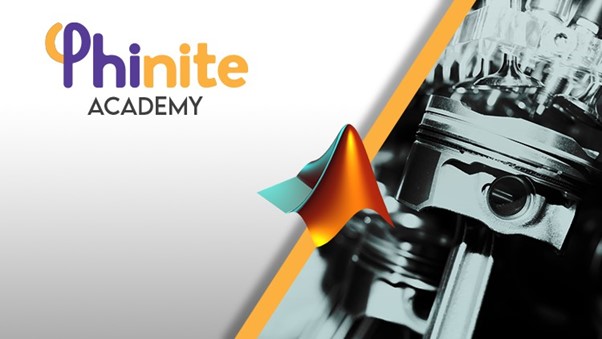 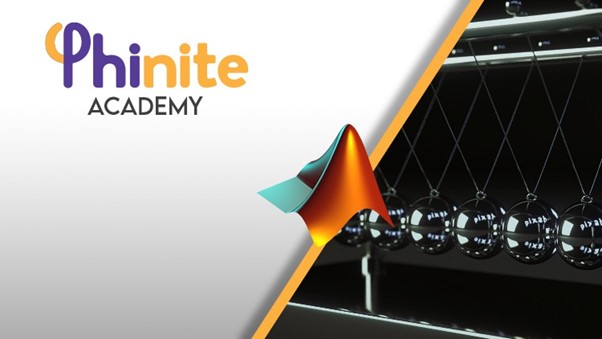