Mean-Variance Analysis is a process that investors utilize to make investment decisions based on their risk tolerance. Investors actually consider the potential variance given by the volatility of returns produced by an asset in the market against the required expected returns of that asset. The mean-variance analysis looks into the average variance in the required expected return from an investment.

The mean-variance analysis is a part of Modern Portfolio Theory (MPT) which is based on the assumption that investors tend to make rational decisions when they possess enough information. The theory also relies on the fact that investors enter the market to simultaneously maximize their returns while avoiding unnecessary risk.

Investors will generally prefer the asset with lower variance from similar assets when allowed to choose.

The mean-variance analysis is comprised of two main components −

The variance may also be equal to zero, which shows no deviation has occurred from the mean. During the analysis of an investment portfolio, variance shows how the returns are spread out during a given period of time.

The expected return is the estimated return security is expected to produce. It is not quite guaranteed as most of the concerns are made depending on the historical data.

Investors usually choose the security out of many that have a lower variance. If two securities show the same variance, the one with the higher expected return will be preferred by the investors.

The Markowitz Efficient Set is a portfolio with maximum returns for a given level of risk based on mean-variance portfolio construction. The efficient solution for a given set of mean-variance parameters which is a given riskless asset and a given risky basket of assets can be plotted on the graph on what is called the Markowitz efficient frontier.

The efficient set is plotted with returns on the Y-axis and risk or the standard deviation on the X-axis. The efficient set is on the line (frontier line) where the higher risk is positively correlated with given increasing returns, which means "higher risk, higher returns.” The best way to build a portfolio is to get the highest returns at a chosen level of risk. 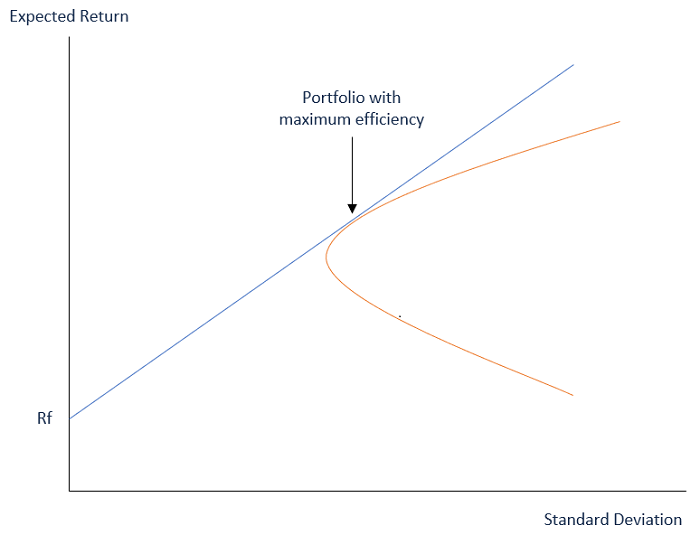 All individuals do not invest in the same securities, as their risk tolerance levels are different. Moreover, investors cannot assume that there is a guarantee of higher returns if they invest in riskier securities. In fact, the set of portfolio becomes inefficient if returns go down at greater levels of risk. At the core of Markowitz efficient set theory is diversification, which lowers portfolio risk.