For decades, man has known the importance of communication. Today, with various means by which one can communicate, it has become much easier to communicate a message to the other party, than it was several decades ago.

Every organization, no matter what their expertise and where they are situated, and what scale they operate, realize and value the importance of good communication.

This communication for organizations takes place both within the organization as well as with other outside stakeholders outside.

The basic flow of communication can be seen in the diagram below. In this flow, the sender sends a message to the receiver and then they share the feedback on the communication process.

The methods of communication too need to be carefully considered before you decide on which method to uses for your purposes. Not all communication methods work for all transactions.

The models help the business organizations and other institutions to understand how communication works, how messages are transmitted, how it is received by the other party, and how the message is eventually interpreted and understood.

Let's have a look at some of the famous and frequently used communication models used nowadays.

One of the earliest models of communication that introduced was Claude Shannon's model. This was introduced in 1948.

Following is a simple illustration of this model.

The diagram above clearly illustrates how communication takes place, and also helps one to determine what could go wrong.

In Shannon's model, the information source typically refers to a person, who then sends a message with the use of a transmitter.

This transmitter could be any instrument today, from phones to computers and other devices. The signals that are sent and received can be vary depending on the method of communication.

The box at the bottom called NOISE refers to any signals that may interfere with the message being carried. This again would depend on the method of communication.

The receiver is the instrument or the person on the other side that receives the. This model is the simplest models to understand the workings of the communication process.

Another famous communication model is Berlo's model. In this model, he stresses on the relationship between the person sending the message and the receiver.

According to this model, for the message to be properly encoded and decoded, the communication skills of both the source and the receiver should be at best. The communication will be at its best only if the two points are skilled.

Berlo's model has four main components and each component has its own sub components describing the assisting factors for each.

Following is the illustration of this model. 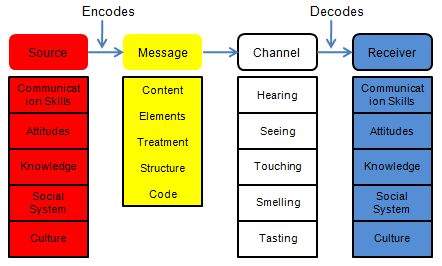 Schramm on the other hand, emphasized in 1954 that both the sender and the receiver take turns playing the role of the encoder and the decoder when it comes to communication.

The following diagram illustrates the model proposed by Schramm. 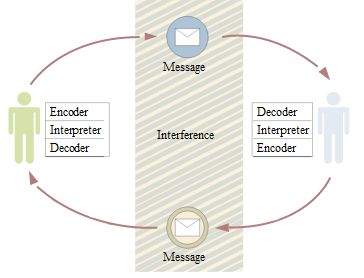 These models have been followed by various other models such as the 'Helical' model, Aristotle's models and several other models.

You should always keep in mind that each of these models has both their advantages and disadvantages. While some communication models try to break down the whole process in order to make it easier to understand, they are not always as simple as they seem.

There are several complexities involved in communications models. This is one thing that needs to be carefully understood in the process of understanding how these models work.

It is best that both parties, the source (sender) and the receiver, are clear about what they would like to discuss. This is also known as the context of the message.

This would make it much easier to decode what the other party is saying without too much trouble. The process of communication, if kept simple and to the point, should not usually have too many issues, and the message will be easily understood by both parties.