Clustering is the procedure to organize elements or items of a given collection into groups based on the similarity between the items. For example, the applications related to online news publishing group their news articles using clustering.

Using Mahout, we can cluster a given set of data. The steps required are as follows:

To cluster the given data you need to -

Mahout works with Hadoop, hence make sure that the Hadoop server is up and running.

You can verify whether the directory is created using the hadoop web interface in the following URL - http://localhost:50070/

It gives you the output as shown below: 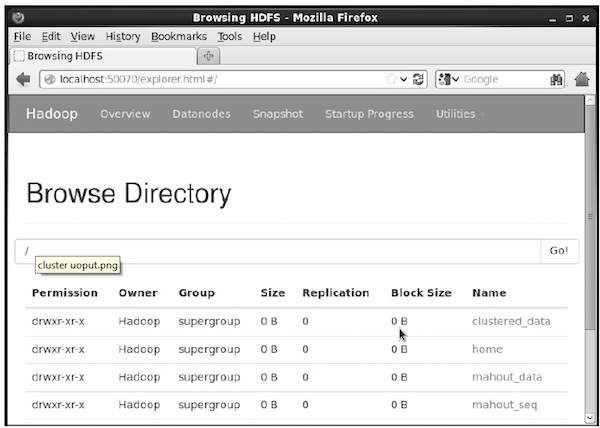 Now, copy the input data file from the Linux file system to mahout_data directory in the Hadoop File System as shown below. Assume your input file is mydata.txt and it is in the /home/Hadoop/data/ directory.

Mahout provides you a utility to convert the given input file in to a sequence file format. This utility requires two parameters.

Given below is the help prompt of mahout seqdirectory utility.

Step 1: Browse to the Mahout home directory. You can get help of the utility as shown below:

Canopy clustering is a simple and fast technique used by Mahout for clustering purpose. The objects will be treated as points in a plain space. This technique is often used as an initial step in other clustering techniques such as k-means clustering. You can run a Canopy job using the following syntax:

Canopy job requires an input file directory with the sequence file and an output directory where the clustered data is to be stored.

You will get the clustered data generated in the given output directory.

Each object will be represented as vector in space. Initially k points will be chosen by the algorithm randomly and treated as centers, every object closest to each center are clustered. There are several algorithms for the distance measure and the user should choose the required one.

Given below are some of the options of seq2parse utility. Create vector files using these options.

After creating vectors, proceed with k-means algorithm. The syntax to run k-means job is as follows:

K-means clustering job requires input vector directory, output clusters directory, distance measure, maximum number of iterations to be carried out, and an integer value representing the number of clusters the input data is to be divided into.