Bharatpur was named after Lord Rama’s brother Bharata who ruled Ayodhya when his brother with his wife Sita and brother Laxman went for exile of 14 years. The family of Bharatpur made Laxman their family deity and engraved his name on their arms, seals and other emblems.

Rustam of Sogariya clan founded Chau Burj and after the declination of the Mughal Empire, he established himself in mewat region. Khemkaran, successor of Rustam lost to Raja Suraj Mal.

Churaman was a Jat who helped the peasants to get rid of the tyranny and ill-treatment by the Mughals. Churaman rose against Mughals but was defeated and killed. He was succeeded by Badan Singh.

After the death of Churaman, Badan Singh brought the Jats together and began to control a large part of territory. Mughal emperor of his time gave him the title of Raja. Badan Singh established himself as a ruler in 1722 and made Deeg his capital. He constructed a royal palace which is now called as Old Palace or Purana Mahal. Deeg was under constant threat of attacks, so prince Suraj Mal built a fort with deep moat and towering walls. 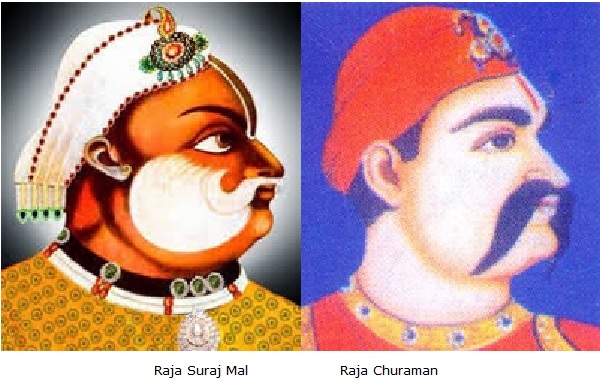 Raja Suraj Mal was succeeded by Jawahar Singh. Once Jawahar Singh went with his mother for Pushkar bath. He was asked to bathe in mud bank but he saw the beautiful bathing enclosures and took bath there. He also constructed a new one. Raja of Jaipur became furious with this act and attacked Raja Jawahar Singh but later he was humbled so Jawahar Singh returned back to Bharatpur.

Lohagarh Fort was built in 18th century by Raja Suraj Mal. Besides this, Suraj Mal built many other forts and palaces. Lohagarh Fort is considered as one of the strongest fort as British could not capture it in spite of several attacks. Lord Lake made a siege of the fort in 1805 for six weeks but in spite of so many attacks he couldn’t annex it.

Jawahar Burj and the Fateh Burj were built to celebrate the victory over Mughals and British. The fort is surrounded by deep moats. There is a legend which states that the fort will fall down if a crocodile takes up all the water of the moats. There is also a legend which states that a gate of the fort was brought from Delhi which Alauddin Khilji brought from the fort of Chittorgarh. The gate was brought and fixed in the fort in 17th century.

Attack on the fort by British

General Lake wanted to create enmity between Rajput and Marathas so he reminded Raja Ranjeet of the treaty. At that time Holker was in his protection and Raja refused to hand him to the British. British laid a siege on the fort and attacked it under the command of Lake but were defeated badly. Many of their soldiers and officers were killed. After two days British broke the wall and the Jats attacked them through artillery.

In the third attack, the British successfully crossed the moat but the attack of Jats filled the moat with the bodies of soldiers. General Lake was asked to have a peace treaty but he refused saying that reinforcement is coming. The combined forces of Holker, Amir Khan and Ranjeet Singh attacked on the British.

When the British force was reinforced from the troops that came from Mumbai and Chennai, they renewed the attack. The British solders were attacked by boulders but still some of them succeeded to enter the fort but British suffered heavy losses. Around 3000 were killed and several thousand were injured. After this Lake went into peace treaty with the Rajputs.