Light can be obtained from various sources like candles, lamp and sunrays etc. Light bulb had invented by Thomas Edison in 1879. An electric current is passed through a filament inside bulb, it gets heated up and emits light when sufficient current is passed through the filament. That means it converts electrical energy into heat energy in the bulb. Where in Light Emitting Diodes (LED), electronic electrical energy can directly converted into light energy.

Light is a energy which is released by atoms. Particles of light are photons which have no mass. Atoms are basic building blocks which are made of small particles such as electrons (negatively charged), protons (positively charges) and neutrons (no charge). These are parts of a nucleus. Electrons revolve around nucleus in different orbits or shells which has different energy level with respect to distance from orbit.

When electrons orbiting the nucleus gains energy from outside source the jump to higher orbit or higher energy level for temporary period then fall back to its lower level energy and releases energy in the form of a photon or light. It cases energy loss in the form of heat.

It is most widely used semiconductor which emit either visible light or invisible infrared light when forward biased. Remote controls generate invisible light. A Light emitting diodes (LED) is an optical electrical energy into light energy when voltage is applied. 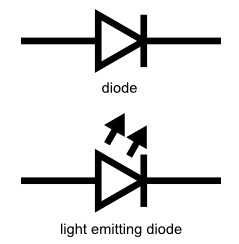 In forward biased, energy is released in the form of light when free electrons in conduction band recombines with holes in the valence band. This process is called electroluminescence. Like a normal p-n junction diode allows electric current only in direction, LEDs also operates only in forward bias condition. The n-type material should be negatively charged and p-type material should be positively charged to create an LED.

There are three layers in a light emitting mode (LED). These are

Trivalent impurities are added to the intrinsic or pure semiconductor. Holes are majority charge carriers.

It is a region or layer between p-type and n-type semiconductor where no charge carriers (free electrons or holes) are present. It is a barrier to current. To overcome this barrier, we need to apply voltage which is greater than barrier potential of this layer.

Light Emitting Diode (LED) works only in forward biased condition where free electrons are from n-side and the holes from p-side are pushed towards the junction. The recombination of free electrons and holes takes place in depletion region as well as in p-type and n-type semiconductor. The free electrons in conduction band releases energy in the form of light before they recomine with holes in the valence band.

Since energy of free electrons is always more than the energy of valence electrons or holes, so it need to lose energy in order to recombine with holes. Hence each recombination of charge emits energy in the form of light. The brightness of the emitted light is depends on the materials used for conducting LED and forward current flow through the LED. 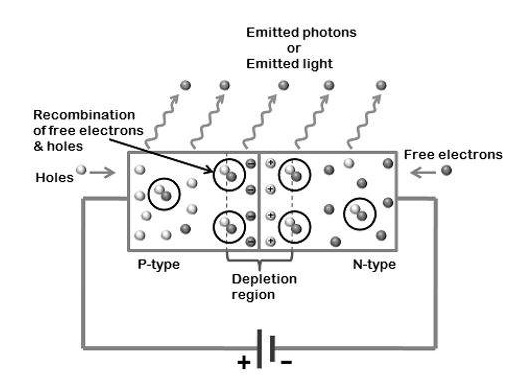 Since LEDs are operate only forward bias condition, so if reverse bias voltage is applied to LED, it may be damaged. LEDs can switched ON and OFF at a very fast speed of 1 ns. The most common colors of LEDs are green, red, orange, and yellow but schematic symbol is same.

The safe forward voltage and current of most LED is from 1V to 3V and 200 mA to 100mA respectively. To avoid destruction of device because of more voltage, we need to place a register (Rs) in series with LED which is placed between LED and voltage source (Vs) and this register is called as current limiting resistor. So we can protect LED from damage by using this current limiting register. The current flowing through LED is mathematically written as,

Where, IF is forward current, VS is source or supply voltage, VD is voltage drop across LED, and RS is register or current limiting register.

The amount of output light emitted by LED is directly proportional to the amount of forward current flowing through the LED.

These are following advantages of light emitting diodes:

Main disadvantages of LEDs are efficiency is low and need more power to operate than normal p-n junction diodes.

These are various applications of LEDs: