Lacrosse - How to Play?

In each team, there are ten players, out of which three are attackers, three are mid-fielders, three are defenders, and one is a goalkeeper or goalie. Each player has to carry a crosse (a lacrosse stick) which measures from 40 inches to 42 inches in length.

Once the referee blows the whistle, the players have to use their sticks and body to try to gain possession of the ball. The face-off specialists try various techniques for getting the ball, like sweeps, clamps, pushes, and plunger moves. Plunger is a move where the player uses the back of the stick to push the ball forward.

In the beginning, after each quarter, and after each goal scored, the match is started/resumed with a face-off. In a face-off, one player each of both the teams place their stick horizontally next to the ball, the head of the stick is very close to the ball and one of them clamps the ball into the head and flicks it off to his teammates.

During a face-off, only the midfielders are allowed to move around in the field to try to secure the ball. The attackers and defenders have to stay inside their restraining boxes unless someone picks up the ball and referee calls possession.

If the ball enters the restraining box before referee calls possession, the attackers and defenders are allowed to pick it up, but they still can’t leave until they possess the ball. Except the goalkeeper, no other player can intentionally touch the ball with their hands. Kicking the ball is also allowed to some extent (to score a goal).

During the match, if any player has to be substituted, they can do it freely by letting the player out and the substitute in. This substitution has to be done in a designated area called the box according to the rules.

A lacrosse match is divided up by four quarters of equal time. Professional and collegiate matches are of 60 minutes in total which means they get 15 minutes per quarter of the match. Most of the scholastic-level matches last for 48 minutes giving 12 minutes to each quarter.

If a match end in a tie at the end of the four quarters, it can be finalized with a sudden death, which are five-minute overtime sessions where a match is played until one of teams scores a goal and wins the match. All the overtimes begin with a face-off as well. 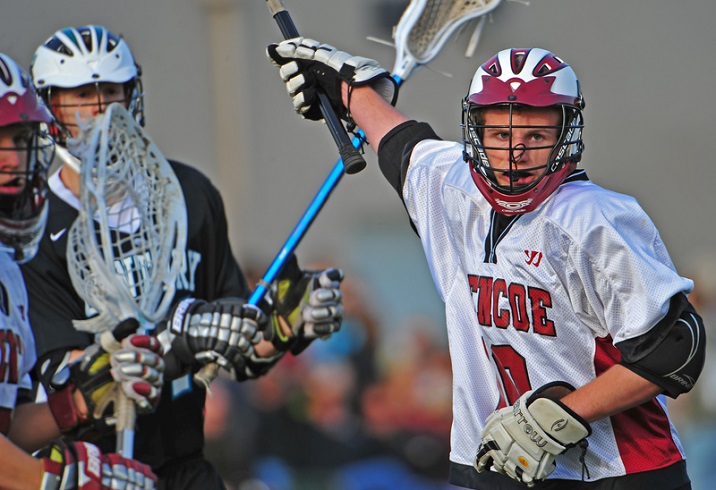 If a player commits a foul, he is sent to the penalty box, located between each team’s bench. The match is continued without this player for the time designated by the referee after the foul. Most of the penalties are releasable which means that the penalty is ended once the other team scores a goal.