In this chapter, we will discuss the basic architecture of Kubernetes.

As seen in the following diagram, Kubernetes follows client-server architecture. Wherein, we have master installed on one machine and the node on separate Linux machines.

The key components of master and node are defined in the following section.

Following are the components of Kubernetes Master Machine.

It stores the configuration information which can be used by each of the nodes in the cluster. It is a high availability key value store that can be distributed among multiple nodes. It is accessible only by Kubernetes API server as it may have some sensitive information. It is a distributed key value Store which is accessible to all.

Kubernetes is an API server which provides all the operation on cluster using the API. API server implements an interface, which means different tools and libraries can readily communicate with it. Kubeconfig is a package along with the server side tools that can be used for communication. It exposes Kubernetes API.

This component is responsible for most of the collectors that regulates the state of cluster and performs a task. In general, it can be considered as a daemon which runs in nonterminating loop and is responsible for collecting and sending information to API server. It works toward getting the shared state of cluster and then make changes to bring the current status of the server to the desired state. The key controllers are replication controller, endpoint controller, namespace controller, and service account controller. The controller manager runs different kind of controllers to handle nodes, endpoints, etc.

Following are the key components of Node server which are necessary to communicate with Kubernetes master.

The first requirement of each node is Docker which helps in running the encapsulated application containers in a relatively isolated but lightweight operating environment.

This is a small service in each node responsible for relaying information to and from control plane service. It interacts with etcd store to read configuration details and wright values. This communicates with the master component to receive commands and work. The kubelet process then assumes responsibility for maintaining the state of work and the node server. It manages network rules, port forwarding, etc.

This is a proxy service which runs on each node and helps in making services available to the external host. It helps in forwarding the request to correct containers and is capable of performing primitive load balancing. It makes sure that the networking environment is predictable and accessible and at the same time it is isolated as well. It manages pods on node, volumes, secrets, creating new containers’ health checkup, etc.

The following illustrations show the structure of Kubernetes Master and Node. 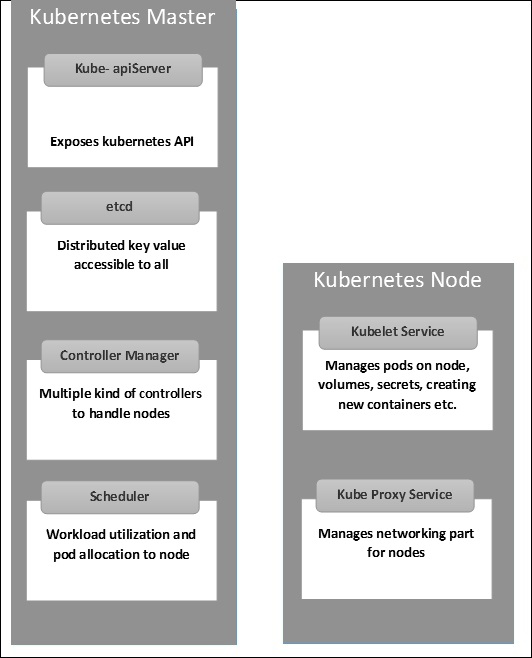