An exception (or exceptional event) is a problem that arises during the execution of a program. When an Exception occurs the normal flow of the program is disrupted and the program/Application terminates abnormally, which is not recommended, therefore, these exceptions are to be handled.

An exception can occur for many different reasons. Following are some scenarios where an exception occurs.

Some of these exceptions are caused by user error, others by programmer error, and others by physical resources that have failed in some manner.

Based on these, we have three categories of Exceptions. You need to understand them to know how exception handling works in Java.

For example, if you use FileReader class in your program to read data from a file, if the file specified in its constructor doesn't exist, then a FileNotFoundException occurs, and the compiler prompts the programmer to handle the exception.

If you try to compile the above program, you will get the following exceptions.

Note − Since the methods read() and close() of FileReader class throws IOException, you can observe that the compiler notifies to handle IOException, along with FileNotFoundException.

For example, if you have declared an array of size 5 in your program, and trying to call the 6th element of the array then an ArrayIndexOutOfBoundsExceptionexception occurs.

If you compile and execute the above program, you will get the following exception.

Errors are abnormal conditions that happen in case of severe failures, these are not handled by the Java programs. Errors are generated to indicate errors generated by the runtime environment. Example: JVM is out of memory. Normally, programs cannot recover from errors. 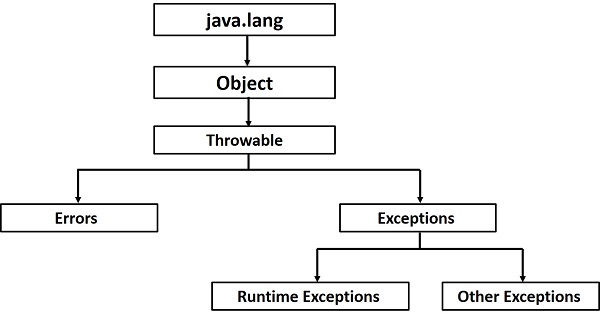 Following is a list of most common checked and unchecked Java's Built-in Exceptions.

Following is the list of important methods available in the Throwable class.

The following is an array declared with 2 elements. Then the code tries to access the 3rd element of the array which throws an exception.

Here is code segment showing how to use multiple try/catch statements.

Since Java 7, you can handle more than one exception using a single catch block, this feature simplifies the code. Here is how you would do it −

You can throw an exception, either a newly instantiated one or an exception that you just caught, by using the throw keyword.

Try to understand the difference between throws and throw keywords, throws is used to postpone the handling of a checked exception and throw is used to invoke an exception explicitly.

The following method declares that it throws a RemoteException −

A method can declare that it throws more than one exception, in which case the exceptions are declared in a list separated by commas. For example, the following method declares that it throws a RemoteException and an InsufficientFundsException −

The finally block follows a try block or a catch block. A finally block of code always executes, irrespective of occurrence of an Exception.

Using a finally block allows you to run any cleanup-type statements that you want to execute, no matter what happens in the protected code.

try-with-resources, also referred as automatic resource management, is a new exception handling mechanism that was introduced in Java 7, which automatically closes the resources used within the try catch block.

To use this statement, you simply need to declare the required resources within the parenthesis, and the created resource will be closed automatically at the end of the block. Following is the syntax of try-with-resources statement.

Following is the program that reads the data in a file using try-with-resources statement.

Following points are to be kept in mind while working with try-with-resources statement.

We can define our own Exception class as below −

To demonstrate using our user-defined exception, the following CheckingAccount class contains a withdraw() method that throws an InsufficientFundsException.

The following BankDemo program demonstrates invoking the deposit() and withdraw() methods of CheckingAccount.

Compile all the above three files and run BankDemo. This will produce the following result −

In Java, it is possible to define two catergories of Exceptions and Errors.