The Intel 8253 is programmable Interval Timers (PTIs) designed for microprocessors toper form timing and counting functions using three 16-bit registers. Each counter has 2 input pins, i.e. Clock &amp; Gate, and 1 pin for“OUT” output. To operate a counter, a 16-bit count is loaded in its register. On command, it begins to decrement the count until it reaches 0, then it generates a pulse that can be used to interrupt the CPU. 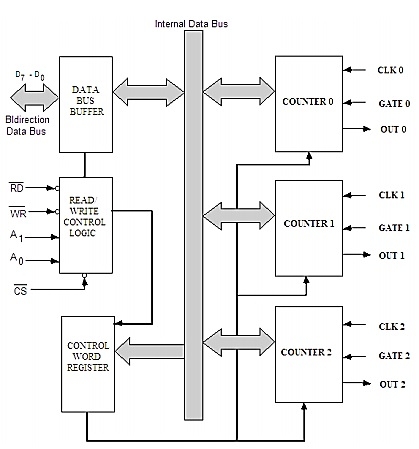 Now let us see how to interface this 8253 timer chip with the Intel 8085 microprocessor. From the following picture, we can see that the data bus D7-0 of 8085 is connected to the data pins D7 to D0 of 8253. So the higher order address bus is used as decoder input to select the chip and the A8 and A9 of 8085 are connected to the pin A1 and A0 respectively to select the counter. 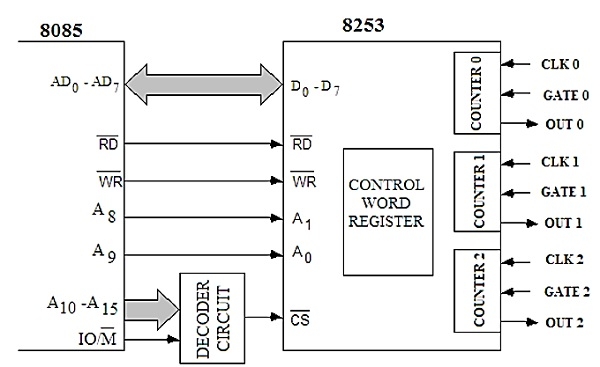 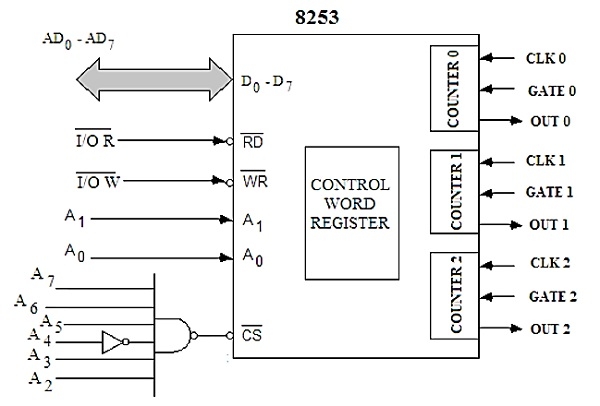 This table is showing how the counter is being selected by using A1 and A0 pins of 8253.

By using the IN and OUT instruction the counter selection and Control Word Register (CWR) setup can be done. If the Accumulator is holding content to load CWR, then by using OUT 13H the CWR will be set. Similarly, by using IN instruction we can get the value of counter value, like IN 11H will get the value from counter 1 and so on.

So the following four steps are needed for counter operations:

At first, to initialize the8253, the Control word will be B2H

Now the control word for latching operation for counter 2 is 80H.