Inter − frame spaces (IFS) are waiting periods between transmission of frames operating in the medium access control (MAC) sublayer where carrier-sense multiple access with collision avoidance (CSMA/CA) is used. These are techniques used to prevent collisions as defined in IEEE 802.11-based WLAN standard (Wi-Fi).

The diagram below shows the different types of inter − frame spacing starting from the shortest duration (highest priority) to the longest duration (lowest priority). Among these, DISF is mandatory and SISF is the next most common one. 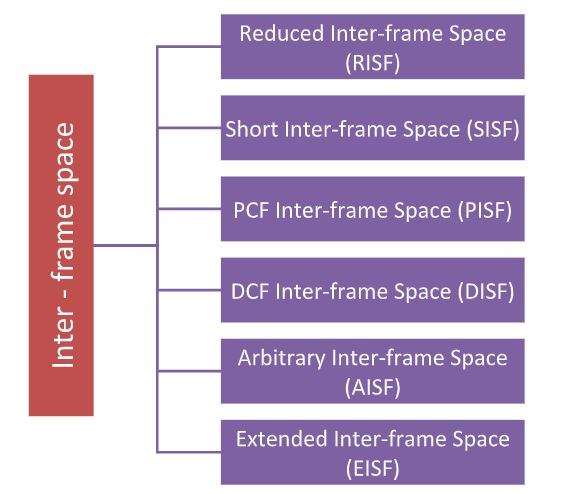 Reduced Inter-frame Space is a very short duration inter − frame spacing used in high priority frames, which is used to send a burst of frames. RISF was introduced in 802.11e QoS amendment and has a duration of RISF of only 2μs.

When a station needs to send multiple frames, RISF is introduced between the individual frames. It ensures that no other station finds a chance to occupy the channel within the frame burst.

Short Inter-frame Spacing (SIFS), is the time interval required by a wireless device in between receiving a frame and responding to the frame. It is used in Distributed coordination function (DCF) scheme, which is a mandatory technique used to prevent collisions.

The duration of SIFS is equal to the sum of delays in radio frequency (RF), Physical Layer Convergence Procedure (PLCP) and processing delay of MAC (medium access control) layer.

In IEEE 802.11 networks, SIFS is the inter-frame spacing maintained before and after the transmission of an acknowledgment frame and Clear To Send (CTS) frame. The duration of SISF is usually 10 μs.

The Access Point (AP) which coordinates the communications centrally, waits for PIFS duration to grasp the channel. Since PIFS is less than DIFS duration, the AP always has the priority to access the channel over the other stations. PISF is calculated as the sum of SISF and slot time.

Distributed coordination function (DCF) is a mandatory technique used to prevent collisions in IEEE 802.11-based WLAN standard (Wi-Fi). It is a medium access control (MAC) sublayer technique used in areas where carrier-sense multiple access with collision avoidance (CSMA/CA) is used.

Using DCF technique, a station needs to sense the status of the wireless channel before it can place its request to transmit a frame. The time interval that a station should wait before it sends its request frame is known as DCF Interframe Spacing (DIFS). DISF is calculated as the sum of SISF and twice the slot time.

In arbitrary inter-frame spacing, the stations are prioritized based upon the Access Category, i.e. the type of data to be transmitted. In this scheme, the waiting period (equal to the AISF) of a wireless station, is shortened or expanded before the station can transmit its frame. Higher priority stations are assigned shorter AISF. This implies that a higher priority station has to wait for a shorter time interval before it can transmit its frame. This is particularly important in delay − critical transmissions like video streaming or voice streaming.

Extended inter-frame spacing is an additional waiting period used in addition to the mandatory DISF in case of corrupted frames.