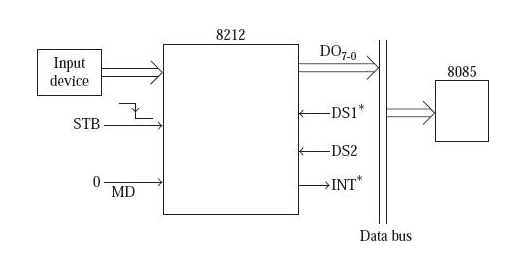 We use this mode generally when we want 8212 to function like an input port. An input device gets connected to DI7-0, and the microprocessor employed here receives the information on DOs ranging from D7-D0. Here in this mode STB acts as clock for the given latches. The latch which is of 8 bits in 8212 follows the series information which is present on DI7 to DI0 as long as STB is equal to 1. When the STB makes a transition, which is high to low then the latches of 8212 gets the information on DI7- DI0. The transition which is High to low of STB activates the INT* such that the driven interrupt data transfer may be performed if it is desired. The latched information of the 8 bits comes out on DO7 to D00 only when the buffers at the outputs gets enabled. The output buffers get enabled when DS1* is equal to 0 and DS2 is equal to 1.

We use this mode when we want 8212 to function as the port of the output.

We use Intel 8212 in variety of applications

Intel 8212 as gated buffer: A weak logic signal is converted to a strong logic when 8212 works in logic 0. The outputs of 8212 in mode 0 is capable of sinking the 15 mA in 0 state, and which proves that a minimum high output voltage of nearly 3.65 V is in the state 1. Intel 8212 is always given backup when the input signal is capable enough to backup 0.25 mA current only. Hence the 8212 when it is in working in the mode 0 it always acts as a buffer.

Bi-directional bus driver: Sometimes bidirectional buffering is which is applicable for the data lines of a microprocessor.