The sport is quite simple unlike all other races. The rider who crosses the finish line first is considered as the winner. The beauty of the sport lies in the numerous challenges which the rider has to face. Let us understand the basics of the sport.

A total of nine flags are used throughout the race. Each flag has a different sign. The rider must acknowledge all the flags throughout the game and should follow the signs strictly. These 8 flags are − 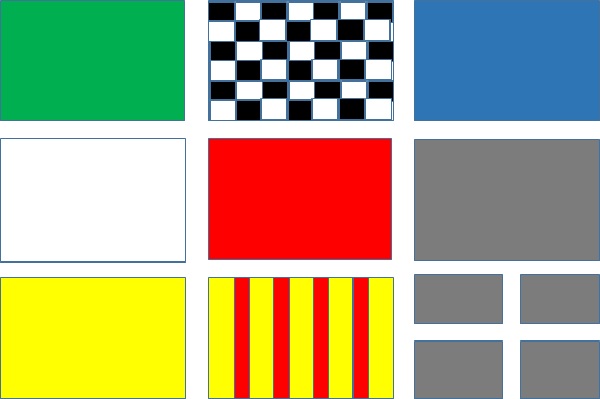 The rider should remember about the signals given by each flag. Throughout the game, the rider should carefully follow all the signs of the flag in order to play a safe game with fair chance of winning.

As we know the tracks in the IndyCar series are of different shapes. So the qualifying procedures differ according to the race track. Given below are the specifications necessary for qualifying various tracks. However, these procedures are not eligible for Indianapolis 500.

The sequence of qualifying is made by a blind draw. Each racing car is allowed to have two warm-up laps before the timed qualification laps. If necessary, the race director may allow some additional warm up laps. The qualification round includes two consecutive timed laps.

The total time taken in the two consecutive timed laps is recorded and is considered as the official qualifying time for the car. This is known as the green flag laps. Each car is allowed to leave the staging pit only once during the entire race.

On the first day of track activity, all cars attend the practice sessions where the drivers are allotted to one or two groups. These groups are made on the basis of combined practice times on the day before the qualifications. The racer with fastest time determines the first two qualifying groups.

The qualifying round has three segments which eventually determine the winner. These segments are −

There will be situations where two or more cars have same qualification times. In this type of scenario, a tie breaker is required to determine the ranks. Here the cars will be ranked according to the sequence in which the attempts for completing qualification occur.