Ice Hockey rightly known as the fastest game in the world. It is all about sensible play on skates by gliding through the ice coated rink, a healthy combat between the teams for more goals is to win the game. The main aim of the game is to hit the puck into the other team’s goal cage; all the five skating players of a team plan and strategize together to overcome the hurdles opened by the opposing team’s players.

The ice on the rink is made by spraying water all over a concrete surface; the freezing pipes under the surface allow the water to freeze. The ideal thickness of the ice is 19mm.

According to the IIHF, the rink measures 200 feet long by 80 feet wide and is divided into three zones. A red line in the middle of the rink is parallel to two blue lines that splits the three zones equidistant from the respective goal cages on both sides of the rink. The central zone is known as neutral zone and the area with red highlighted circles is the defending zone. The area with blue highlighted circles and opposing net is the attacking zone as shown in the below rink layout. 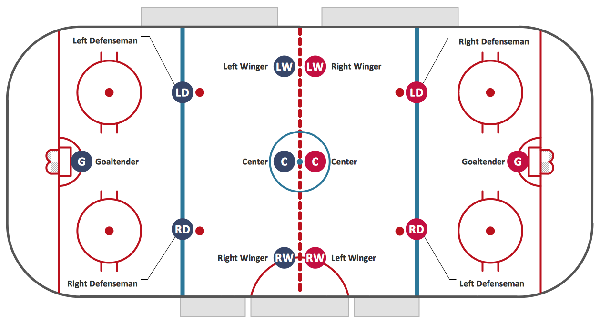 The pointers G in the layout are known as goal posts or goal cages at both ends of the rink surface and the goal cages are covered with nets at the back shown as a symbol ‘m’. The two red lines behind the G circles termed as goal lines. The goal cage’s nylon material net ideally measures 4 feet high and 6 feet wide guarded by goaltenders at each end.

Ice hockey game is typically timed for 1 hour with three 20 minute period intervals. The game clock keeps ticking only if the puck is being played by the players on the rink. If there is any halt in the play the game clock is stopped immediately. The attacking and defending teams changes ends of the rink after second and third period intervals and also at the start of overtime.

The play starts with a face-off, when centre player marked in the layout as C from both teams are positioned at the centre of the rink in front of each other and the referee places the puck on the ice between them. The centre players of both the teams try to gain possession of the puck to start the play. Apart from the start of the game face-off is used to resume the play after any stoppage of the game.

In a tie game scenario, 5-minute overtime is given for the play and the team scores a point to win the game. Even after overtime if the game is still in tie, a shootout is played with 3 shooters of each team, the team with more goals wins the game.