Ice Hockey - How to Play?

Ice Hockey starts with an opening face-off before the game. The referee meets both the team center players at the centre of the ice and drops the puck between the two opposing players. Both the centre strikers try to get the possession of the puck by fighting for it. The team with the possession of the puck is known as the attacking team and the other team known as defending team.

Players and their Positioning

In Ice Hockey, each team consists of six players on the rink. The players are positioned on the rink as shown in the picture below. All the players except the goaltender can go around the rink with no limitations. The goaltender alone cannot skate across the centre red line.

The Defense players line up behind the center player on his left and right side to handle the puck during the play. The goaltender is positioned in front of the goal cage. He is the most strongest of the team. He is responsible to block the puck from reaching the net and stop the other team to make goals.

Goaltenders and defensemen are primarily responsible to block the other team players from scoring a goal whereas the forwards (center and winger players) are accountable to score goals against the opponent team. The goalkeepers challenge the opponent team players and shoot the puck for a counterattack.

The attacking team with six players take possession of the puck after face-off and tries to keep passing the puck with their hockey sticks to the opponent team’s goal cage to score points. The opponent team called the defending team tries to block the puck from advancing into their goal cage. The attacking and defending teams keep changing roles based on the possession of the puck. The game is played in three intervals of 20 minute each. The teams change ends after second and third interval of the game.

The game starts with the Face-off and the center players take control of the puck. The wingers give in full support in shooting the puck while the defensemen stay in pairs on left and right hand side taking control over puck when the other players fail to do so.

The three key guidelines of ice hockey game that can restrict the movement of the puck are offside, icing, and puck out of play. A player is said to be "offside" if he passes the other team’s zone before the pass of the puck to their zone. Icing is said to occur when the puck is hit by defending team across the centre red line and the goal line at once without contact with any other player’s hockey stick. The puck is said to be “Out of play” when it goes away from the ice rink and immediately stoppage of the game is done.

Handling the Stick and Moving the Punk

Ice hockey is all about moving the puck with the hockey stick. Both these vital skills are mandatory for the players on the ice to take control of the puck and advance it to the other team’s goal cage just by skating through the ice rink. The center skater having the possession of the puck needs to skate in with the opponents and most importantly without losing the possession of the puck. The other team players create free spaces for the puck carrier and try to set up a scoring opportunity playing against the goaltender to make a goal.

Stickhandling is basically the art of moving the puck to aim for a subsequent goal and scoring a point. Ice hockey players usually possess excellent skating skills eventually in the game. When the puck is introduced the players skating ability drops off as they need to balance themselves on the skates and keep the puck moving with their sticks. For the player to maintain coordination between his head and eye along with keeping the puck on the stick, some simple rules are followed −

Puck control − It is the art of possessing the puck against opposing players on the rink. The whole game of ice hockey is based on puck possession. It is compulsory for all the players and importantly the puck carrier to gain control of the puck and sustain it until another player is accessible to advance the puck. The best technique to retain the ownership of the puck is when the player moves in between the puck and a defenseman, the player uses his arms to keep the defenseman away and use the stick to handle the puck. This situation occurs mostly near the corners, adjacent to the boards of the rink and all around the goal cage area. 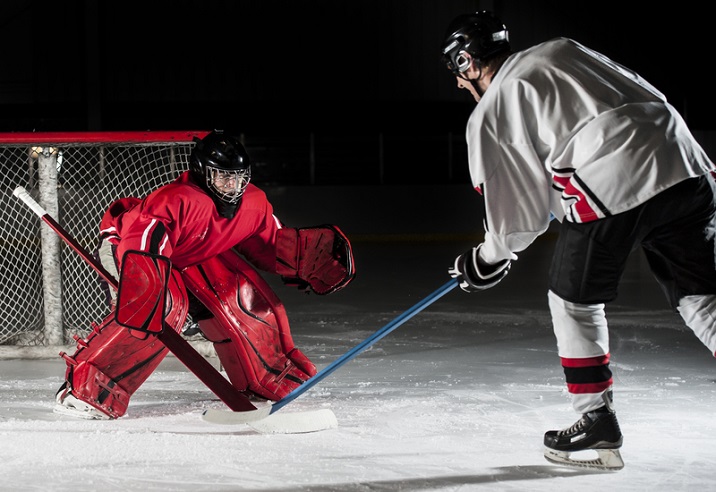 In Ice Hockey, game is played on a point based scoring structure. The main objective of the skaters is to score goals to get points based on the goals made by the team. The team scoring highest number of points is declared winner of the game. Apart from goals the teams get points for an Assist. Usually assist is credited to two players of the goal making team the player who touches, passes, hits or deflects the puck and the this player’s movement supports the forward to make a goal. These assist players are given points based on their play. The defensemen who gain an assist will get one point added to the total.

A goal in this game is scored when the puck is hit across the goal line and is placed in the goal cage crossing the blockages by other team’s goaltender. One point is awarded for the team who scored a goal.