How Nokia 3310 could still be relevant in today’s Smartphone Era?

Every time your smartphone troubles you all you could think of is the time when things were so simple back. I mean – Yes I like smartphones where you carry a complete package of entertainment, news, and necessity with you. Never to forget the self-camera, apps like WhatsApp, Instagram and Snapchat makes it’s more irresistible. Still being unsatisfied humans we still want more battery backup, better performance, and minimal hanging. 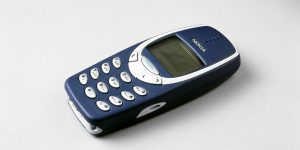 In short, we want a merger of our previous type based phone with our new smartphones. Remember the era when mobile phones were first launched? Nokia was the best option we had and owning a Nokia phone back then was like owning an iPhone now. The evergreen phone Nokia 3310 launched in 2000 specially designed for young people and of course for people who have a habit of breaking things or things fall from their hands always.

It was a legendary phone with some amazing features like being indestructible, water resistant and great battery life. The phone was originally designed and produced in Finland. In fact Finland made it a national emoji-marking it as unbreakable in 2015. Given below are some of the features of Nokia 3310 which later marked the phone as one of the most desired and iconic phone created ever. 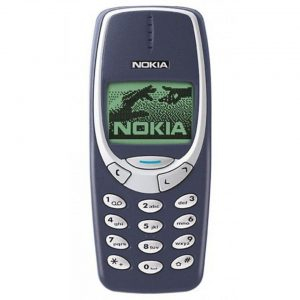 It’s plastic shells and easily removable click buttons that could be easily removed and, in fact, replaced in case some buttons didn’t work. No wonder it made our life lot easier, with no keywords not working or phone hanging in the middle of something.

This plastic shells not only prevented the phone from breaking but they were also responsible for providing great mobile signals. So call connections were better. In 2010 Apple with its newly launched iphone4, discovered it through iPhone’s “Antenna Gate” that calls made through metal and glass smartphone have inferior signal quality as compared to the plastic ones.

Nokia 3310 being squat, stubby and small easy to carry have become the coolest style statement for the 90s kids. It was popular or it’s navy blue but easily customizable covers with garish features.

If you compare Nokia 3310 with today’s smartphones it may sound like a dumb phone. But back in those days, the competitors considered this phone as some supercomputer. The phone had a stopwatch, alarm clock, calculator and a special feature of sending a text message with 140 characters.

Nokia was known not for all its usability features but also for its amazing entertainment mediums. The evergreen classic snake game. Remember the Snake II, no need to describe the game. It was all about 2 for the top, 4 for down, 6 for right, and 8 for left. So we are talking about the features that made the phone so special 17 years ago. But today with growing demands our priorities and choices have changed. The standards have changed and we’re habitual of using our smartphones. After all these years Nokia 3310 has been relaunched again.

The new version of Nokia 3310 will be released under the license by the finish start-up HMD Global along with some other Nokia-branded Android smartphones. Now that’s a smart move to relaunch the once famous Nokia again. Announcing 3310 again with Nokia3, Nokia 5 and Nokia 6. This big announcement was made prior to Mobile World Congress tech show in Barcelona. Nokia no longer makes phones on their own but creates telecoms equipment, Ozo virtual reality cameras and health kit under the Withings brand.

Features of the new Nokia 3310

The new version of Nokia 3310 can be considered as feature phone instead of a smartphone as the internet facilities provided in the phone are limited. It only uses 2.5G connectivity. Today when we are acquainted of using the 3G and 4G internet, nobody would want to go for 2.5G again. It is powered by the S30+ operating system that gives access to web browsing but limited choice of apps as compared to android or iOS. It has a single camera with 2 megapixels screen. 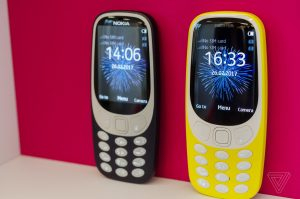 On the other hand, it has a great better life. The black and white phone now as a colour-screened phone with month’s standby time. It also offers 22 hours of talk time. The classic snake-II game has been improvised with a modern version. The phone has been launched with the price of €49 ($51,75; £41.51).

In a recent interview with BBC HMD’s chief executive Arto Nummela said, “It’s almost like a digital detox or a holiday phone,” he further added, “If you want to switch off to an extent but you still need to have a [mobile] lifeline, it’s a brilliant solution. Why wouldn’t you buy this like candy? If you see this hanging on the shelf at the checkout in a [see-through] package, then you’d just buy it as an accessory.” 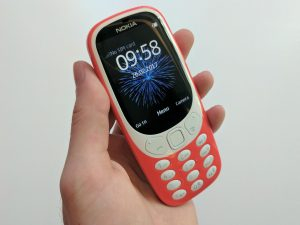 Ben Wood from technology consultancy CCS Insight said “The 3310 was the first mass-market mobile and there’s a massive amount of nostalgia and affection for it”, he further added, “If HMD had just announced three Android devices they would have barely got a couple of column inches in the press. So, the 3310 is a very clever move and we expect it will sell in significant volumes.”

On the other hand, Nokia upgraded 3310 in the past once to get back its customers’ attention. There are huge possibilities that it would definitely try to upgrade it to some next level. As this would increase its fan following and customers. Features like having 4G connectivity, VoLTE support, Dual Sim slots/ Nano or micro Sim slots, USB type c charging and syncing contact and calendar. 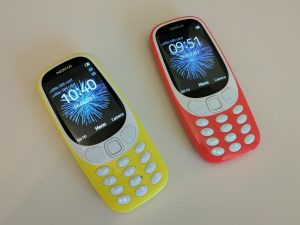 Honestly, the new Nokia 3310 would not be the first choice of any buyer. As we all are kind of addicted to our smartphones and we can’t or to say we don’t want to get back to our type based cell phones. But it could definitely be a secondary phone.

A phone which people would want to keep always at hand. As this phone would never hang, it has great call connection quality. The phone would not run out of battery easily and would not break easily. 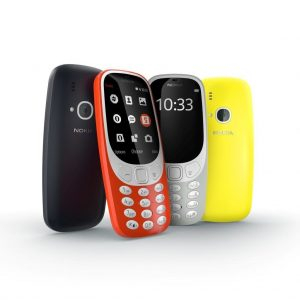 How can we forget the upgraded brand new version of classical games like Snake and Space impact? If the company is now launching the 3310 phone again, it means they would be definitely expecting a boost in sales and profits. It would definitely plan to make it center of attraction with all these smartphones in line offering extravagant features.

India is still waiting to welcome the new launches of Nokia. It would be tempting to try the all the new Nokia phones. Personally, I am waiting for Nokia to launch their versions in India and I get to try them all. That would definitely help me give some honest reviews about all the three smartphones and the new advanced Nokia 3310.