How can Matplotlib be used to three-dimensional line plots using Python?

Matplotlib is a popular Python package that is used for data visualization. Visualizing data is a key step since it helps understand what is going on in the data without actually looking at the numbers and performing complicated computations.

It helps in communicating the quantitative insights to the audience effectively. Matplotlib is used to create 2 dimensional plots with the data. It comes with an object oriented API that helps in embedding the plots in Python applications. Matplotlib can be used with IPython shells, Jupyter notebook, Spyder IDE and so on.

Three dimensional plots are created to view the x−, y− and z−axes of the data points. It can also be used to understand how the gradient descent function works, and to find the optimal values for coefficients for an algorithm. 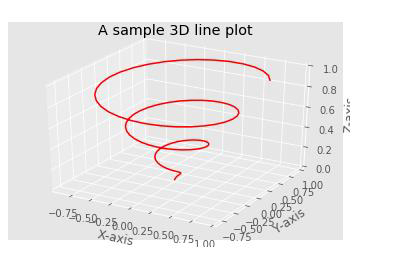