How are Spectrum and Bandwidth defined in Wireless Communications?

Spectrum refers to the entire range of frequencies that exist in the microwave band. Therefore, the spectrum of microwave radiation is (300 MHz to 300 GHz).

What is the difference between spectrum and bandwidth?

Example- difference between spectrum and bandwidth

frequencies may not be used by the application. So, if only 17 MHz to 20 MHz is used by an application, then, those range of frequencies used is called the ‘bandwidth’.

The commercial FM radio is one good example that explains the difference between the spectrum and the bandwidth. Spectrum here refers to the entire range of frequencies allocated for the FM radio application which is usually around 20 MHz (108 MHz to 87.5 MHz). An FM radio station doesn’t occupy the entire frequency band but just a fraction of it. Let us say that an FM station operates over the center frequency 93.5 MHz FM radio stations are usually allocated a bandwidth of 200 kHz. So, the range of frequencies over which the FM radio station operates is 93.4 MHz to 93.6 MHz. 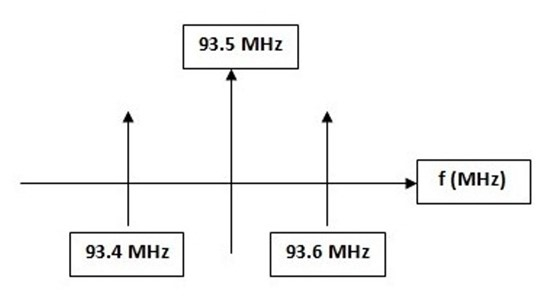 Let us look at one more example to understand the difference between spectrum and the bandwidth. Grapes come in different colours, sizes and tastes depending on the growing conditions and methods. The entire family is still called grapes even though there are differences in colour, size and taste. Bandwidth, however, refers to a particular group- a group of grapes grown in area X might have black colour, slightly sour taste Spectrum = 20 MHz Bandwidth of the radio station = 200 kHz and oval figure while a group of grapes grown in area Y might have green colour, sweet taste and oval figure.