Gwalior Fort was built in 8th century by Suraj Sen. The fort stands on a solitary rock known as Gopachal. The fort was ruled by many rulers of various dynasties who also built many palaces and temples inside the fort. The combined forces of Rani Lakshmi Bai and Tatya Tope also fought here against the British. 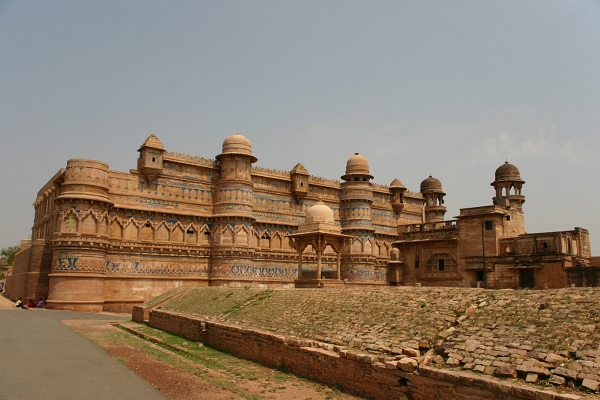 Gwalior district is situated in Madhya Pradesh state of India. The city, situated nearby Agra, has many mosques, palaces, temples and other structures. Tomars, Mughals, Marathas, and Scindias ruled the city in different periods. The city has hot subtropical climate from March to June, hot and humid climate from July to October and winter from November to February.

Gwalior Fort is opened for the tourists from 9:00am to 5:00pm on all days. It takes around one to two hours to visit the whole fort. Sound and light show is also organised in the fort. The show in Hindi starts at 7:30pm and in English from 8:30pm.

Gwalior has many hotels where tourists can stay. These hotels range from inexpensive budget hotels to expensive five star hotels. Usha Kiran Palace is the only five-star hotel in Gwalior. Besides hotels, there are resorts, cottages on hire, government guest houses, farm houses, and many other places where the tourists can stay.

According to a legend, Gwalior was once ruled by a king named Suraj Sen. A time came when he was suffering from leprosy which was incurable. A sage named Gwalipa gave him water from a sacred pond which cured his disease. In order to honour the sage, the king constructed the fort.

The king got the title of Pal from the sage and a boon that the fort will be in his possession and the generations to come. History says that 83 generations of the king successfully ruled from this fort but the king of 84th generation named Tej Karan could not protect the fort and lost it.

There are inscriptions in the fort which date back to sixth century and indicate that the fort may have been constructed in those times. Mihirakula, a Huna emperor, built a sun temple here.

In 9th century, Teli ka Mandir was built by the rulers of Gurjara-Pratihara dynasty. In 10th century, Kachchhapghatas controlled the fort. These people worked under the leadership of Chandelas.

In 11th century, Muslim dynasties began attacking the fort. Mahmud of Ghazni attacked the fort in 1022AD. Qutubuddin Aibak captured the fort in 1196AD and annexed it to Delhi Sultanate. Though the sultanate lost the fort but was again captured by Iltumish 1232. 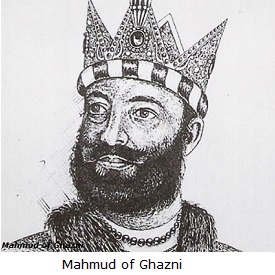 Gwalior For in 14th Century and Further 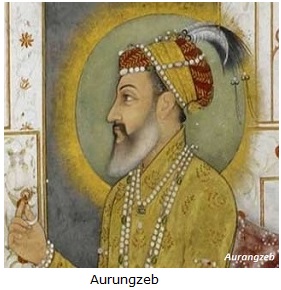 Marathas again captured the fort in 1784. This time due to the hostility of Ranas of Gohad, British cannot capture the fort. British defeated Daulat Rao Scindia and recaptured the fort later. In 1886, India was in full control of the British so they gave the fort to the Scindias who ruled the fort till 1947.

Gwalior Fort is one of the massive forts of India. It includes many structures like palaces, temples, and water tanks. The fort is spread in an area of 3km and is built at a height of 35 feet. There are two gates to enter the fort. One of them is Hathi Pol or elephant gate and other one is Badalgarh gate. Elephant gate is the main entrance to the fort. Many temples are there which are still in use. They are as follows −

Siddhachal Jain Temple Caves was built during the period of 7th and 15th century. There are 32 Jain temples in the fort out of which eleven are dedicated to the Jain Tirthankaras. The remaining ones are situated in south of the fort. Rishabhanath or Adinath was the first Jain Tirthankara and his idol is the tallest one as its height is 58 feet 4 inch or 17.78m. 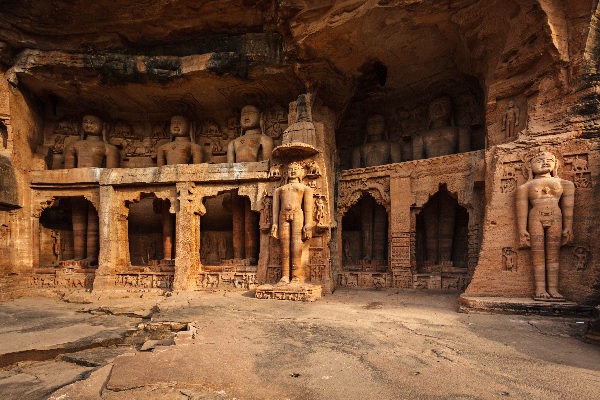 Gopachal is a hill which consists of 1500 idols. The size of these idols range from 6 inches to 57 feet. The period of carving these rock-cut idols is between 1341 and 1479. One of the largest idols is of Bhagwan Parsvanath whose height is 42feet and width is 30 feet. 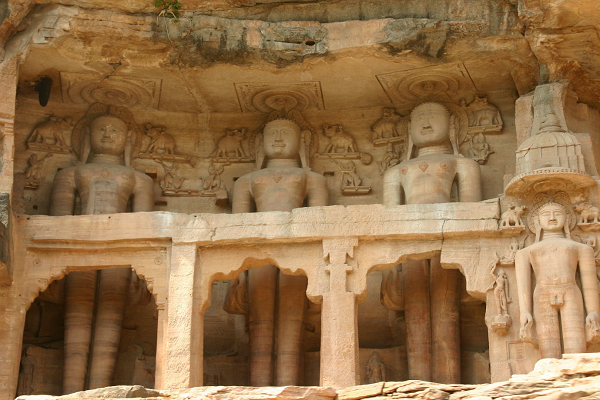 Teli ka mandir or oilman’s temple is said to have been built in 8th or 11th century and was renovated in 19th century. The temple includes north and south Indian architectural styles. The temple was built in rectangular shape and people can enter the temple through a staircase. 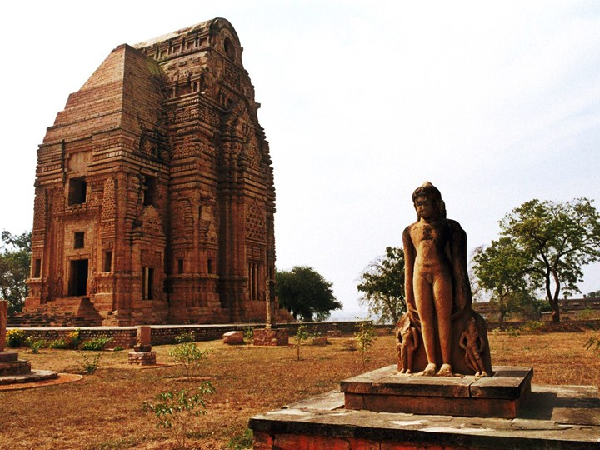 King Mahipal of Kachchhapaghata dynasty built Sas Bahu temple also known as Sahastrabahu temple. The area covered by the temple is 32m x 22m. Devotees can enter the temple through three gates located in three different directions. The main deities who are worshipped here are Brahma, Vishnu, and Saraswati and their idols are located above the entrance door. 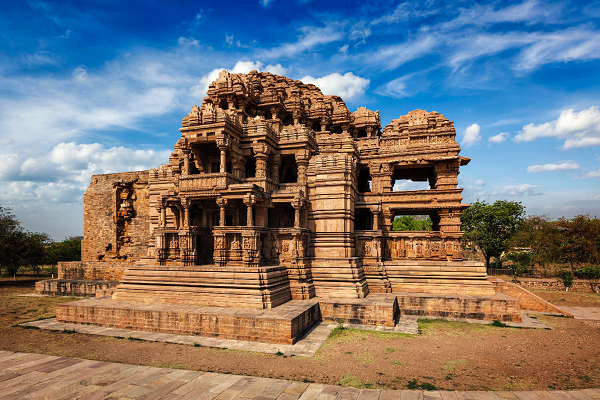 There are many palaces in the fort which are as follows −

Man Mandir palace was built by Raja Man Singh between 1486AD and 1517AD. The exterior of the palace was decorated with tiles and the walls include carvings of ducks floating in water. There were large rooms which served as a music room for royal women. 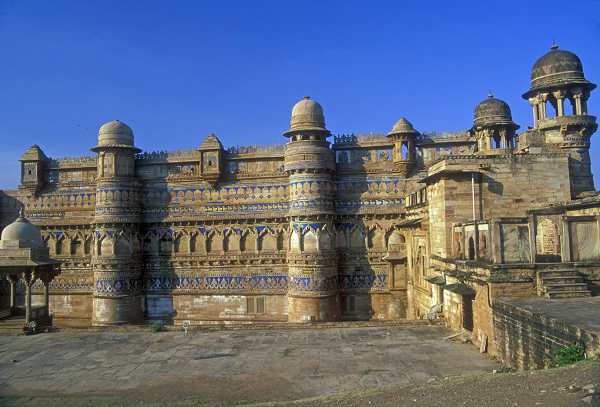 During the Mughal period, prisoners were imprisoned in underground dungeon. During the Rajput period, the womenfolk performed jauhar in a jauhar pond during an attack or invasion. Tourists can go to the palace through the elephant gate or Hathi Pol.

Kirti Singh built this palace in the fort. He was the second king of Tomar dynasty. Karan Singh was another name of Kirti Singh and so the palace was named as Karan Mahal. 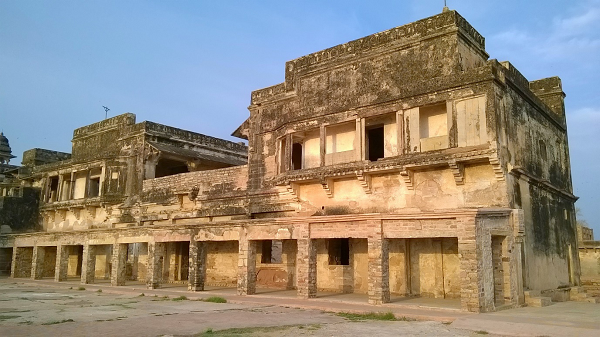 Vikramaditya Singh was the elder brother of Man Singh. He constructed Vikram Mahal which was also known as Vikram Mandir because it had a temple of Lord Shiva which was destroyed during the Mughal period. The temple has now been rebuilt in front of the palace. 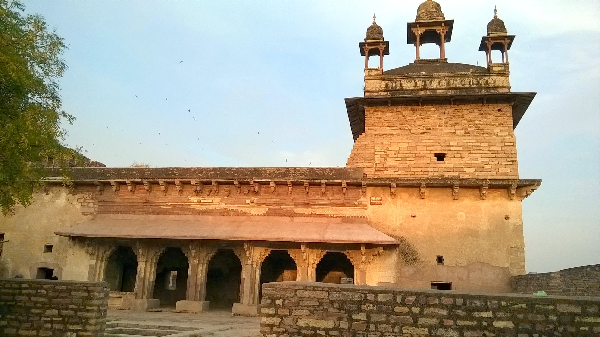 Gujari Mahal was constructed by Raja Man Singh for his queen Mrignayani. She demanded a separate palace with uninterrupted water supply. The palace has now been converted into an archaeological museum. The museum now has weapons, statues, arttifacts made of stones and other materials. 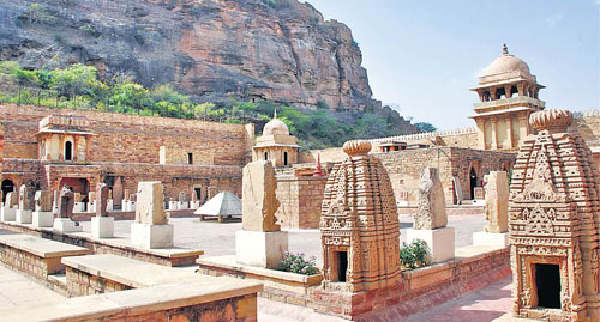 Hathi Pol or elephant gate is the main gate through which tourists can enter the fort. This gate also leads to the Man Mandir Palace. The gate is located at the south-eastern part of the fort. The gate is named as hathi pol due to the huge statue of an elephant which adorned the gate. Stone has been used to build the gate. The gate has cylindrical towers and cupola domes which are linked by carved parapets. 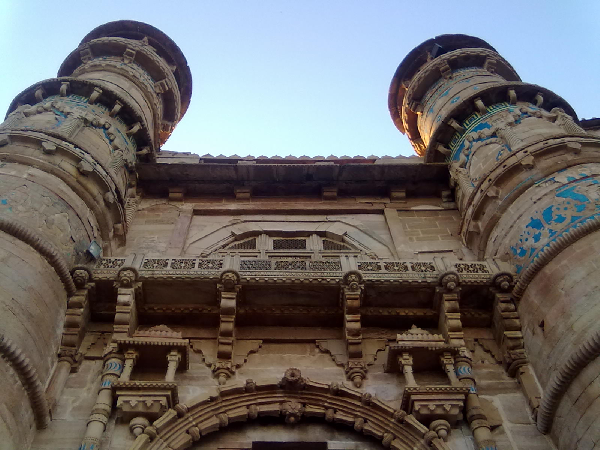 Bhim Singh Rana belonged to Gohad state and also ruled Gwalior from 1740. He captured Gwalior when Mughal Governor Ali Khan surrendered. Bhim Singh also built a lake named Bhimtal in the fort. The chhatri of Bhim Singh Rana was built by his son and successor Chhatra Singh near the bhimtal. On the occasion of Ram Navami, Jat Samaj Kalyan Parishad organizes a fair every year.

Gurudwara Data Bandi Chhor was a worship place where Guru Hargobind Singh, the sixth Sikh Guru, used to pray. After Guru Arjun Dev, he was made the sikh guru. Guru Hargobind Singh raised an army to fight the cruelty at that time. He also provided justice to the people at Amritsar. When Jahangir came to know about this, he invited the guru to have a talk with him. 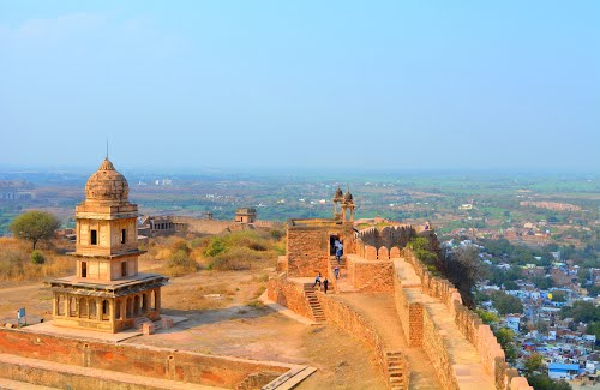 Jahangir was impressed by the guru and both had a good understanding. Once Jahangir fell ill and some people conspired and told that only a holy man can cure him. They suggested the name of Guru Hargobind Singh so Jahangir called him and asked him to live in the Gwalior Fort.

When the wife of Jahangir came to know about the illness of Jahangir, she summoned Sain Mian Mir ji who told that a holy man has been captured so the health of the emperor is declining. When emperor came to know this he ordered the release of the guru. The guru told that he will only leave if 52 other Rajput rulers will also be released. The place in the fort where the guru worshipped came to be known as Gurudwara Bandi Chhor.

Gwalior Fort - How to Reach?

Gwalior is a district of Madhya Pradesh state and is situated nearby Agra. The city is well connected with most of the Indian cities through road, rail, and air transport. The approximate distance of Gwalior from cities nearby are as follows −

Gwalior has only domestic airport that is connected to many important cities of the country. The name of the airport is Rajmata Vijaya Raje Scindia Air Terminal which is 8km away from the city. People will get flights of Air India only which connects Gwalior to various cities.

Gwalior is well-connected to various cities through rail. Rajdhani, shatabdi, superfast, express, and mail trains connect Gwalior to cities like Delhi, Chennai, Kolkata, etc. There are a few trains that originate from and terminate at Gwalior. The city falls on the route of New Delhi Jhansi section.

Gwalior is well connected to many cities by road. People can catch buses for Agra, Bhopal, New Delhi, Jaipur, Ajmer, and many other places. MPSRTC provides bus services to these places. People can catch regular buses, AC buses, deluxe and super deluxe buses to reach their destination.

There are many hiring agencies that provide cab or taxi for a fixed period. Besides this, the facility of local bus service is also available where people can travel either in regular local bus or luxury bus.

There are many places nearby Gwalior Fort which the people can visit. These monuments include tombs palaces, museums etc. Some of these monuments are as follows −

Mohammad Ghaus was a Sufi saint in 16th century and was the teacher of Humayun and Tansen. His tomb was built during the reign of Akbar. The tomb is one kilometre away from Gwalior Fort. The tomb has a large dome on the top and a large room where the saint is buried. The room is surrounded by a veranda like structure having jaalis. The dome has been placed on a rectangular base having four chhatris. 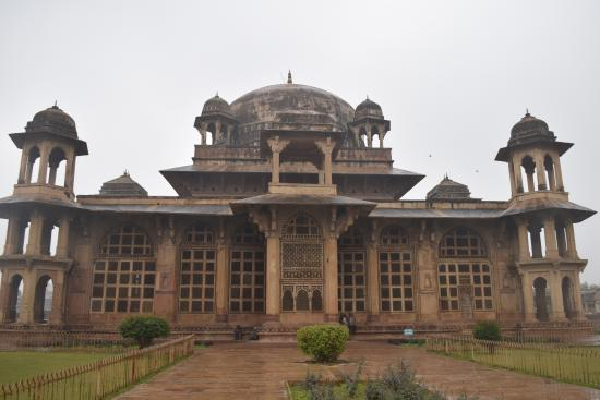 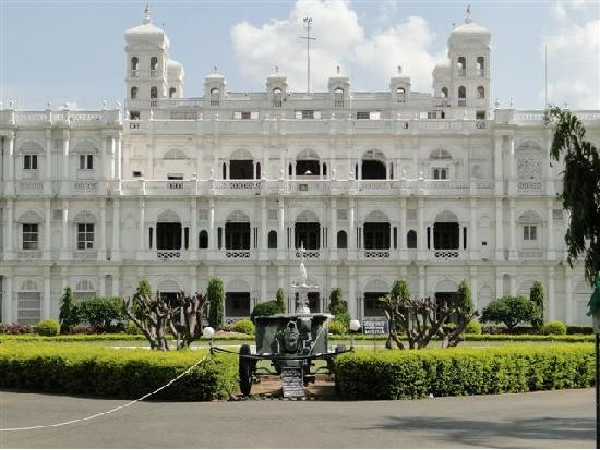 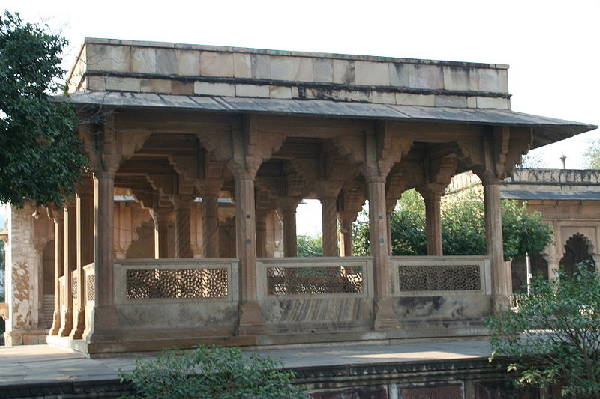 Sun Temple or Surya Mandir is an important place to visit in Gwalior. Many tourists and devotees come to visit the temple every year. G.D. Birla built this temple in 1988 as per the design of the sun temple built in Konark. The temple has beautiful sculpture of Sun God. The exteriors of the temple is made up of red sand. 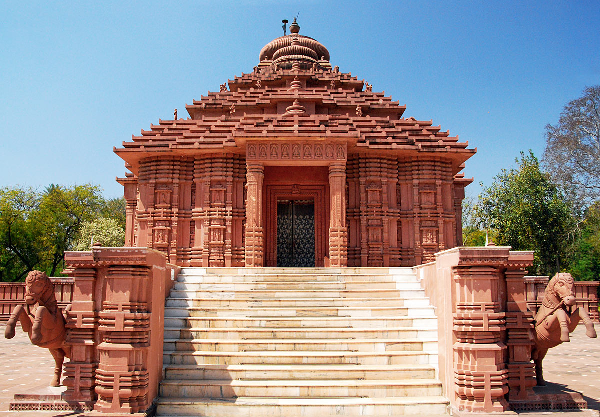 The full name of Khwaja Kanoon sahib was Saiyed Saiyeeduddin Kanoon Rehmat Ullah Aleh Chishtiya. He came to Gwalior from Marwar in 1481AD and died in 1533AD. The tomb has two domes and each stands on a rectangular base. There are three entrances and a beautiful garden in front of the tomb. 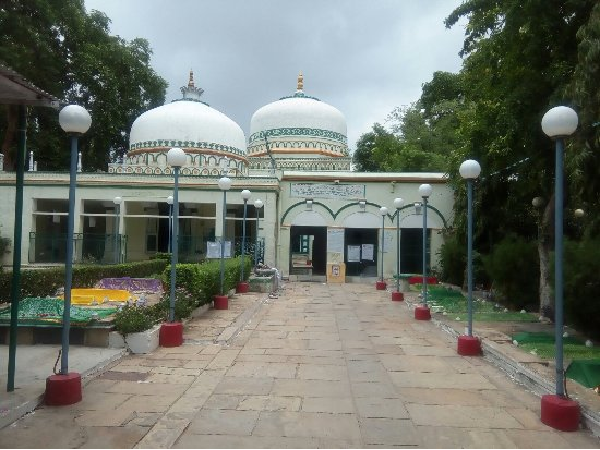