In OFDMA, multiple access is achieved by assignment of different subsets of subcarriers to individual stations. This permits transmission to go on simultaneously at lower data rate from several stations.

The stations assigned to a given subcarrier alternate between sending and receiving using time division duplexing (TDD). In TDD, the uplink of a station is separated from the downlink by allocating different time slots in the same frequency band of a subcarrier. This allows asymmetric flow of data for upstream and downstream. Each station is allotted separate time slots for uplink and downlink transmission.

Frame Structure of OFDMA with TDD 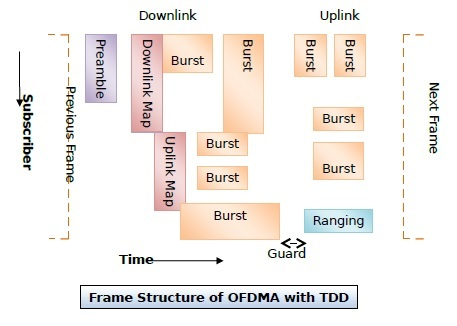