Forex Trading - The Role of Inflation

The rise and fall of inflation within a country also provides information about the medium term direction in foreign exchange and the current account balance of a country is also used to determine the long term movements of foreign exchange.

It is a general belief (among economic theories) that low inflation is good for the economic growth of a country while high inflation points to poor economic growth. High inflation in a country means the cost of consumer goods is high; this points to less foreign customers (less foreign currency) and the country’s trade balance is disturbed. Lesser demand of the currency will ultimately lead to a fall in currency value.

Foreign exchange is very much affected by inflation which directly affects your trades. Declining exchange rate decreases your purchasing power. This in turn will influence the interest rates.

Following diagrams show the relation between inflation, interest rates and the economic growth of a country − 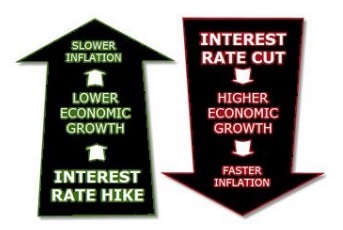 A detailed knowledge on inflation helps you to make your forex market trades profitable.

Let us now see the major indicators of inflation that the market tends to watch at all times especially in forex market trades.

It is the output of the citizens of the country (like India or US) and the income from assets owned by the country entities, regardless of the location; whereas, the Gross Domestic Product (GDP) represents the total monetary value of all goods and services produced ver a specific time period – the size of the economy.

GDP is usually expressed in comparison to previous year or previous quarter (3 month). For example, if the year-to-year GDP is 4%, this means the economy has grown by 4% over the last year.

In 1991, the US switched from using GNP to using GDP as its primary measure of production.

GDP has a direct impact on nearly every individual of the country. A higher GDP indicates there is low unemployment rate, higher wages as businesses demands labor to meet the growing economy.

Every economic data release is essential for a forex trader; the GDP data holds a lot of importance as it directly indicates the overall state of a country. As GDP data may create lots of volatility in the currency market, traders try to create a new position or may hedge their existing position (long or short position).

If the country economy is growing (GDP), the benefit will eventually affect the consumer; this leads to an increase in spending and expansion. Higher spending leads to increase in prices of consumer goods which country central bank will try to tame if they begin to outpace the rate of economic growth (high inflation).

The producer price index or PPI in short, is a monthly report detailing the purchasing price of various consumer goods. It measures the change in prices charged by wholesalers to their clients like the retailers who then add their own profit margin to the producer’s price and sell it to consumer.

It is important because traders mainly use the PPI as an indicator of price inflation over time. One major drawback especially for forex market traders is that PPI excludes all data on imported goods, making it difficult for traders or investor to detect the influence of one country’s market on another with respect to currency prices.

In general, the PPI is more volatile with larger fluctuations than the CPI (Consumer Price Index), is giving a macro sense of the underlying price developments that are not necessarily reflected on consumer’s bills.

The Consumer Price Index (CPI) proves effective on central banks (like RBI, US Federal Reserve), and market participants. It holds more significance when compared with the PPI.

CPI indicates the cost of living in a country, has a direct effect on interest rates.

It CPI index measures the prices changes at the retail level. It stores the price fluctuations only to extent that a retailer is able to pass them on to the consumer.

Higher CPI gives central banks (RBI, FED) the necessary supportive data to rate hikes (though it’s not the only factor which central bank looks for). Higher interest rates are bullish for the country’s currency.

The CPI includes sales taxes number but excludes income taxes, prices of investments like bonds or prices of homes.

The CPI report is generated monthly and covers data of the preceding month.

The core CPI is the most noticeable figures among market participants. This does not include food and energy prices and central bank (to adjust its monetary policy