In 8085 microprocessor, the flags register can have a total of eight flags. Thus a flag can be represented by 1 bit of information. But only five flags are implemented in 8085. And they are: 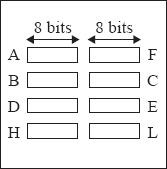 However, in any data transfer instruction, none of the flags bits in flag register are affected. Now let us consider each flag bit separately for our further discussions.

Carry flag (Cy): after performing the addition of any two 8-bit numbers, the carry generated can be either 0 or 1. That is only 1-bit. Thus to store the carry information 1-bit storage is enough. The Cy flag is stored in the LS bit position in the flags register. Instructions that use the Cy flag are widely used in the user programs.

Auxiliary carry flag (Ac): Now let us consider the addition of any two 8-bit (2-hex digit) numbers, a carry may be generated when we add the LS hex digits of the two numbers. Such a carry is called intermediate carry also known as half carry, or auxiliary carry (AC). Intel prefers to call it AC. In the above Example 1, AC was not generated but in Example 2, AC is generated.

As this is only an intermediate carry, we may not be interested in storing this bit information. But 8085 microprocessor still stores this AC information in bit position 4 of the flags register. The result of execution of DAA instruction, is affected by the status of this flag. However, in our 8085 instruction set does not provide any instruction, which explicitly uses the AC flag.

Instructions that use the S flag are quite often used in the user programs.

As the user does not really care for the number of 1's present in the result after an arithmetic operation, this flag is not of much use practically.