This chapter gives an overview of Extreme Programming.

In business, ‘agile’ is used for describing ways of planning and doing work wherein it is understood that making changes as needed is an important part of the job. Business‘agililty’ means that a company is always in a position to take account of the market changes.

In software development, the term ‘agile’ is adapted to mean ‘the ability to respond to changes − changes from Requirements, Technology and People.’

A team of software developers published the Agile Manifesto in 2001, highlighting the importance of the development team, accommodating changing requirements and customer involvement.

The Agile Manifesto states that −

We are uncovering better ways of developing software by doing it and helping others do it. Through this work, we have come to value −

Following are the characteristics of Agility −

The following trends are observed in software engineering −

Extreme Programming − A way to handle the common shortcomings

Extreme Programming builds on these activities and coding. It is the detailed (not the only) design activity with multiple tight feedback loops through effective implementation, testing and refactoring continuously.

Extreme Programming is based on the following values −

What is Extreme Programming?

XP is a lightweight, efficient, low-risk, flexible, predictable, scientific, and fun way to develop a software.

eXtreme Programming (XP) was conceived and developed to address the specific needs of software development by small teams in the face of vague and changing requirements.

A key assumption of Extreme Programming is that the cost of changing a program can be held mostly constant over time.

This can be achieved with −

Extreme Programming in a Nutshell

Iterating facilitates the accommodating changes as the software evolves with the changing requirements. 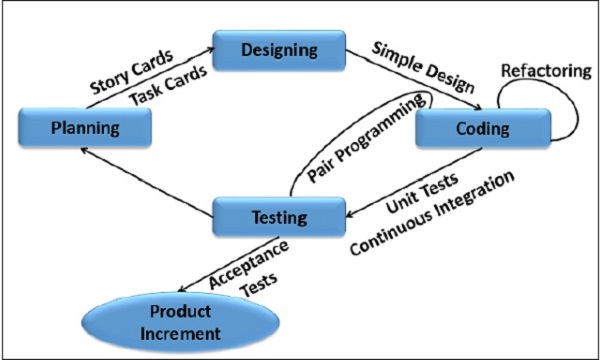 Why is it called “Extreme?” 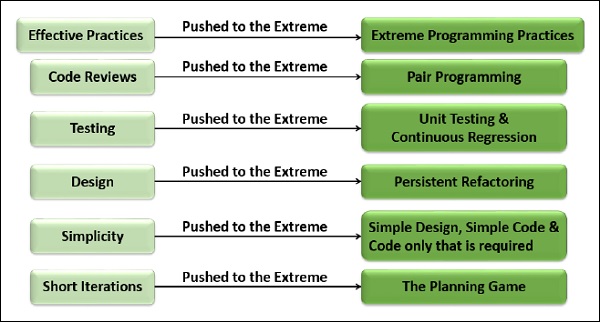 Kent Beck, Ward Cunningham and Ron Jeffries formulated extreme Programming in 1999. The other contributors are Robert Martin and Martin Fowler.

In Mid-80s, Kent Beck and Ward Cunningham initiated Pair Programming at Tektronix. In the 80s and 90s, Smalltalk Culture produced Refactoring, Continuous Integration, constant testing, and close customer involvement. This culture was later generalized to the other environments.

In the Early 90s, Core Values were developed within the Patterns Community, Hillside Group. In 1995, Kent summarized these in Smalltalk Best Practices, and in 1996, Ward summarized it in episodes.

In 1996, Kent added unit testing and metaphor at Hewitt. In 1996, Kent had taken the Chrysler C3 project, to which Ron Jeffries was added as a coach. The practices were refined on C3 and published on Wiki.

Extreme Programming has been evolving since then, and the evolution continues through today.

The success of projects, which follow Extreme Programming practices, is due to −