Explain the concept of delegates in C# 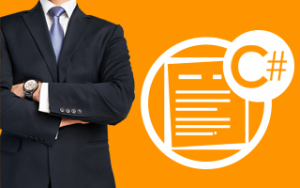 If you are a C programmer, then delegates can be thought of as pointers to the function. However, delegates in C# are much more than a simple function pointer. This article explains the concept of delegates and their uses in day-to-day programming.

Essentially, delegates provide a level of indirection. They encapsulate a piece of code that can be passed around and executed in a type-safe way. Instead of executing the behavior immediately, it is contained in an object. There are multiple actions that you can perform on that object, and one of them is executing that contained behavior.

We can assign any methods (including lambdas, instance, or static methods) to an instance of Transformer that fulfills the signature. For example −

When to use delegates?

Delegates are typically used when the code that wants to execute some actions doesn't know the details of what those actions should be but knows the interface of those actions.

In programming, we are often faced with situations where we need to execute a particular action, but we don't know in advance which method we will want to call upon to execute it. Delegates help us solve this problem by replacing that behavior with a delegate and then passing a concrete instance of that delegate with the appropriate behavior as needed by the context and the situation.

In order for a delegate to do anything, four things need to happen −

1) The delegate type needs to be declared.

A delegate type is essentially the definition of the function it's representing, i.e. it consists of the parameter types the function will accept and a return type that it returns.

For instance, a delegate type that represents a method that takes two numbers as input and returns a number can be declared as −

Processor is a type, similar to a type created by a class. To create an instance of this type, you need a method that takes two numbers as input and returns a bool.

2) The code to be executed must be contained in a method.

Define a method that does have the exact same signature as the above delegate type and that does what you want according to the situation at runtime. For example, any of the following methods can be used to create an instance of Processor, as they all take two numbers and return a number.

3) A delegate instance must be created.

Now that you have a delegate type and a method with the right signature, you can create an instance of that delegate type. In doing this, we are essentially telling the C# compiler to execute this method when the delegate instance is invoked.

4) The delegate instance must be invoked.

However, C# makes it even easier. You can directly invoke the delegate instance as if it was a method in itself. For example,

If we want to execute a list of different actions with a single invocation of a delegate instance, C# allows us to do that. The System. Delegate type has two static methods, called Combine and Remove.

If any of the actions in the invocation list throws an exception, that prevents any of the subsequent actions from being executed.