The .NET centric applications are meant to windows operating system up till now, but now Microsoft has introduced a new cross-platform application called Mono which enables the execution of the application developed under the .NET platform in Linux environment by giving an impression in such a way that as if we are running Linux package rather than executing .exe file.

Mono is an open-source utility that allows the developer to execute .NET centric applications on other platforms such as Mac or Linux as it provides an installation package for Windows platform to compile and execute .NET assemblies on Windows OS without ever installing the Visual Studio IDE or .NET Framework SDK. Hence, we can build real-time, production-ready assemblies that use Windows Forms, LINQ, XML web services, ADO.NET and ASP.NET by taking advantage of existing core CLR namespaces under Mono. First, download the Mono binaries using the wget utility and execute these series of commands to configure it properly as;

Apart from that, install the MCS package too alternatively, to compile the .NET binary as following;

Then, open the Terminal and hit the following commands to compile the code.

The aforesaid command will generate an executable file like windows. Now hit the ./test.exe or mono test.exe command to run the C# binary; Here, the screenshot summarized everything we have done so far. 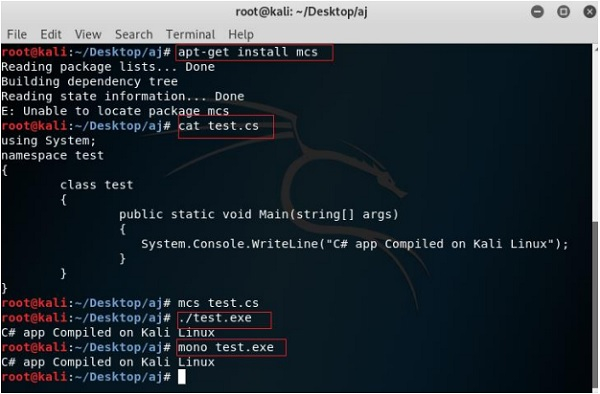