A key feature of ESP32 that makes it so much more popular than its predecessor, ESP8266, is the presence of two cores on the chip. This means that we can have two processes executing in parallel on two different cores. Of course, you can argue that parallel operation can also be achieved on a single thread using FreeRTOS/ any other equivalent RTOS. However, there is a difference between two processes running in parallel on a single core, and they running in parallel on different cores. On a single core, often, one thread has to wait for the other to pause before it can begin execution. On two cores, parallel execution is literally parallel, because they are literally occupying different processors.

Sounds exciting? Let's get started with a real example, that demonstrates how to create two tasks and assign them to specific cores within ESP32.

To use FreeRTOS within the Arduino IDE, no additional imports are required. It comes inbuilt. What we need to do is define two functions that we wish to run on the two cores. They are defined first. One function evaluates the first 25 terms of the Fibonacci series and prints every 5th of them. It does so in a loop. The second function evaluates the sum of numbers from 1 to 100. It too does so in a loop. In other words, after calculating the sum from 1 to 100 once, it does so again, after printing the ID of the core it is executing on. We are not printing all the numbers, but only every 5th number in both the sequences, because both the cores will try to access the same Serial Monitor. Therefore, if we print every number, they will try to access the Serial Monitor at the same time frequently.

You can see above that we have shifted the print statement for Task 2 to the right. This will help us differentiate between the prints happening from Task 1 and Task 2.

Next we define task handles. Task handles serve the purpose of referencing that particular task in other parts of the code. Since we have two tasks, we will define two task handles.

Now that the functions are ready, we can move to the setup part. Within setup(), we simply pin the two tasks to the respective cores. First, let me show you the code snippet.

Now let's dive deeper into the xTaskCreatePinnedToCore function. As you can see, it takes a total of 7 arguments. Their description is as follows.

Finally, the loop can be left empty, since the two tasks running on the two cores are of more importance here. 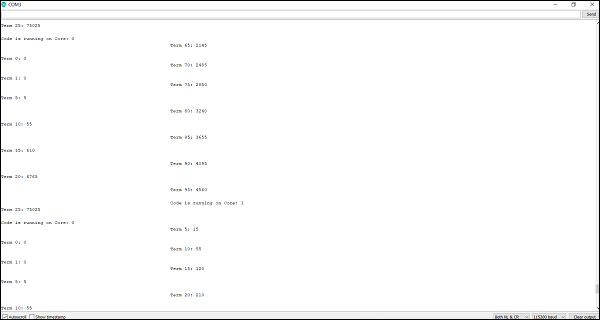 Please note that Arduino sketches, by default, run on Core 1. This can be verified using Serial.print( xPortGetCoreID()); So if you add some code in loop(), it will run as another thread on Core 1. In that case, Core 0 will have a single task running, while Core 1 will have two tasks running.