Digital Subscriber Line technology is a Copper Loop Transmission Technology, which satisfies bottleneck problems that are often associated with the last mile between the network and service providers.

While DSL technology provides dramatic improvements in speed, (up to 8+ Mbps) compared to other network access methods, the true strength of DSL-based service opportunities lies in the actions like −

As shown in the following sample comparison chart, DSL-based services offer Performance Benefits for the Network Service Users when compared to other network access methods. In Addition, DSL-based services expand these operational improvements for public and private (Campus) operators. 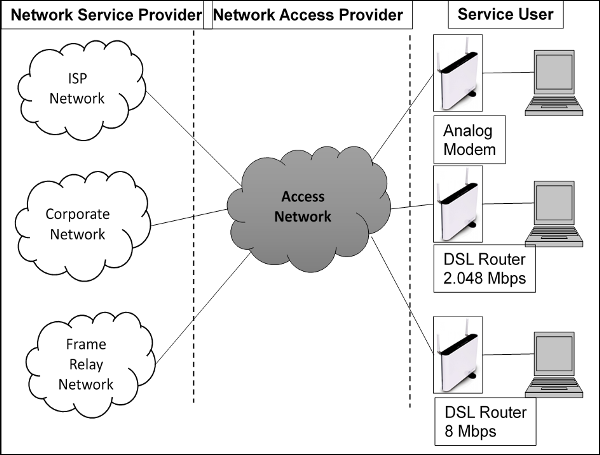 One of the compelling advantages of DSL technology is that it is the NSP and helps the Service Users to take full advantage of the existing infrastructure, layer two and layer three Protocols (such as Frame Relay, ATM and IP), and have reliable network services already entrusted to come.

DSL can easily support advanced business-class services such as Voice over DSL (VoDSL) and new variants of proven and well-understood technologies such as the Frame Relay over DSL (FRoDSL). The latest generation of DSL equipment also offers end-to-end Service Level Management (SLM). For simplicity, in our discussion regarding business class DSL applications, we will group all of these under a new acronym − SLM-DSL.