The I/O interface supports a method by which data is transferred between internal storage and external I/O devices. All the peripherals connected to a computer require special communication connections for interfacing them with the CPU.

The I/O bus is the route used for peripheral devices to interact with the computer processor. A typical connection of the I/O bus to I/O devices is shown in the figure. 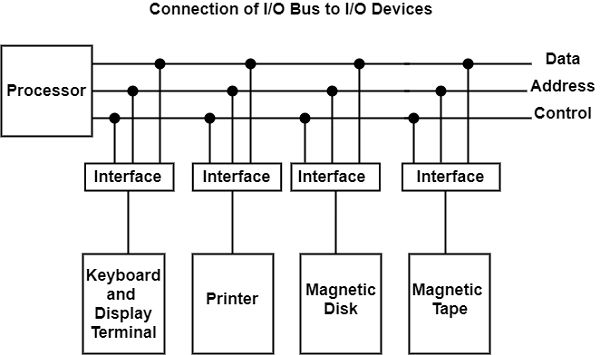 The I/O bus includes data lines, address lines, and control lines. In any general-purpose computer, the magnetic disk, printer, and keyboard, and display terminal are commonly employed. Each peripheral unit has an interface unit associated with it. Each interface decodes the control and address received from the I/O bus.

When the address is recognized by the interface, it activates the direction between the bus lines and the device that it controls. The interface disables the peripherals whose address does not equivalent to the address in the bus.

An interface receives any of the following four commands −