Bayes' Theorem is named after Thomas Bayes. There are two types of probabilities −

where X is data tuple and H is some hypothesis.

According to Bayes' Theorem,

There are two components that define a Bayesian Belief Network − 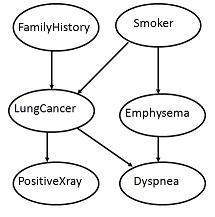 The conditional probability table for the values of the variable LungCancer (LC) showing each possible combination of the values of its parent nodes, FamilyHistory (FH), and Smoker (S) is as follows −