Exceptions provide a way to transfer control from one part of a program to another. C++ exception handling is built upon three keywords: try, catch, and throw.

You can list down multiple catch statements to catch different type of exceptions in case your try block raises more than one exception in different situations.

The catch block following the try block catches any exception. You can specify what type of exception you want to catch and this is determined by the exception declaration that appears in parentheses following the keyword catch.

Above code will catch an exception of ExceptionName type. If you want to specify that a catch block should handle any type of exception that is thrown in a try block, you must put an ellipsis, ..., between the parentheses enclosing the exception declaration as follows −

The following is an example, which throws a division by zero exception and we catch it in catch block.

Because we are raising an exception of type const char*, so while catching this exception, we have to use const char* in catch block. If we compile and run above code, this would produce the following result −

C++ provides a list of standard exceptions defined in <exception> which we can use in our programs. These are arranged in a parent-child class hierarchy shown below − 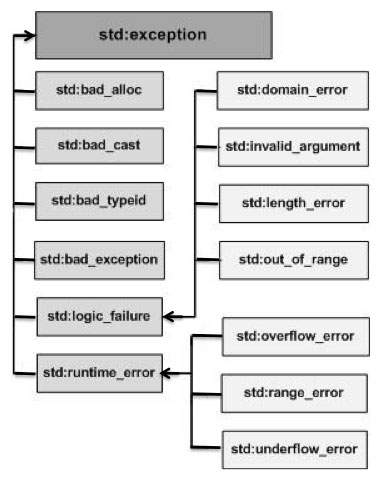 This would produce the following result −

Here, what() is a public method provided by exception class and it has been overridden by all the child exception classes. This returns the cause of an exception.