Quicksort is a sorting technique which uses comparisons to sort an unsorted list( array ). Quicksort is also known as partition exchange sort.

It is not a stable sort, Because the relative order of equal sort items is not preserved. Quicksort can operate on an array, requiring small additional amounts of memory to perform the sorting. It is very similar to selection sort, except that it does not always choose worst-case partition. So, so we can take it as a better formed of selection Sort.

QuickSort is one of the most efficient sorting algorithms and is based on the splitting of an array into smaller ones. The name comes from the fact that quicksort is capable of sorting a list of data elements significantly faster than any of the common sorting algorithms. And like Merge sort, Quick sort also falls into the category of divide and conquer approach of problem-solving methodology. 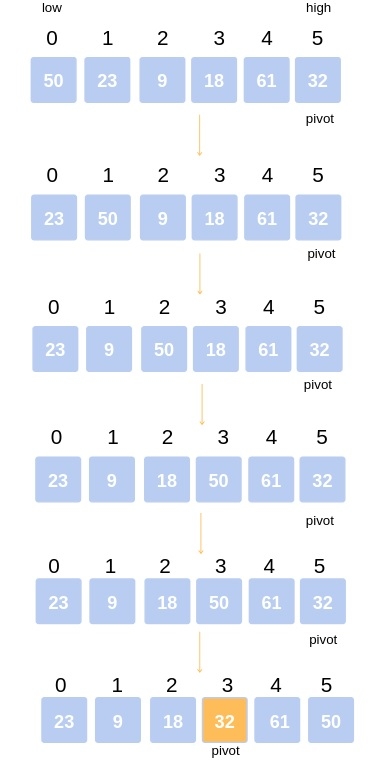 Step 1− Decide any value to be the pivot from the list (generally the last value). Suppose for two values “Low” and “High” corresponding to the first index, and last index.

Hence, call for partitioning, rearranging the array in such a way that pivot (32) comes to its actual position. And to the left of the pivot, the array has all the elements less than it, and to the right greater than it.

In the partition function, we start from the first element and compare it with the pivot. Since 50 is greater than 32, we don’t make any change and move on to the next element 23.

Similarly, for the next element 18 which is less than 32, the array becomes

Lastly, we swap our pivot with 50 so that it comes to the correct position.

Step 2− Hence the array after the first step becomes

Step 3− Now the list is divided into two parts:

Step 4− Repeat the steps for these sublists again.