Thread is the smallest unit of execution in an operating system. It is not in itself a program but runs within a program. In other words, threads are not independent of one other and share code section, data section, etc. with other threads. These threads are also known as lightweight processes.

To understand the functionality of threads in depth, we need to learn about the lifecycle of the threads or the different thread states. Typically, a thread can exist in five distinct states. The different states are shown below −

A new thread begins its life cycle in the new state. However, at this stage, it has not yet started and it has not been allocated any resources. We can say that it is just an instance of an object.

As the newly born thread is started, the thread becomes runnable i.e. waiting to run. In this state, it has all the resources but still task scheduler have not scheduled it to run.

In this state, the thread makes progress and executes the task, which has been chosen by task scheduler to run. Now, the thread can go to either the dead state or the non-runnable/ waiting state.

A runnable thread enters the terminated state when it completes its task or otherwise terminates.

The following diagram shows the complete life cycle of a thread − 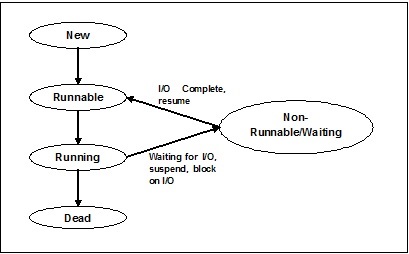 In this section, we will see the different types of thread. The types are described below −

These are user-managed threads.

The examples of user level threads are − 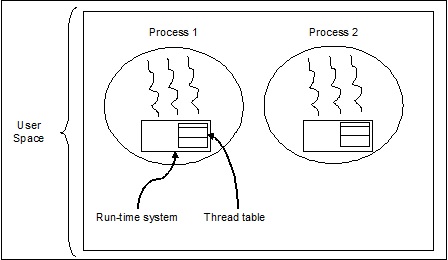 Following are the different advantages of user level threads −

Following are the different disadvantages of user level threads −

Operating System managed threads act on kernel, which is an operating system core.

The Kernel maintains context information for the process as a whole and for individual threads within the process. Scheduling by the Kernel is done on a thread basis. The Kernel performs thread creation, scheduling and management in Kernel space. Kernel threads are generally slower to create and manage than the user threads. The examples of kernel level threads are Windows, Solaris. 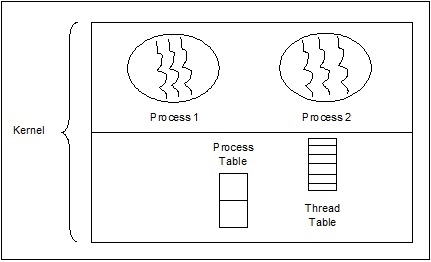 Following are the different advantages of kernel level threads −

Thread Control Block (TCB) may be defined as the data structure in the kernel of operating system that mainly contains information about thread. Thread-specific information stored in TCB would highlight some important information about each process.

Consider the following points related to the threads contained in TCB − 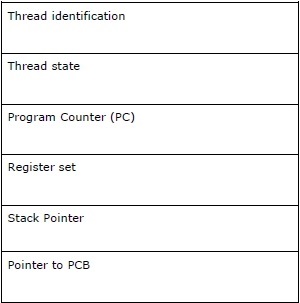 In multithreading, process and thread are two very closely related terms having the same goal to make computer able to do more than one thing at a time. A process can contain one or more threads but on the contrary, thread cannot contain a process. However, they both remain the two basic units of execution. A program, executing a series of instructions, initiates process and thread both.

The following table shows the comparison between process and thread −

The concept of multithreading can be understood with the help of the following example.

We can see in the above diagram that more than one thread can exist within one process where every thread contains its own register set and local variables. Other than that, all the threads in a process share global variables.

Let us now see a few advantages of multithreading. The advantages are as follows −