There are different system and memory architecture styles that need to be considered while designing the program or concurrent system. It is very necessary because one system & memory style may be suitable for one task but may be error prone to other task.

As the name suggests, such kind of systems would have one sequential incoming data stream and one single processing unit to execute the data stream. They are just like uniprocessor systems having parallel computing architecture. Following is the architecture of SISD −

The advantages of SISD architecture are as follows −

The disadvantages of SISD architecture are as follows −

As the name suggests, such kind of systems would have multiple incoming data streams and number of processing units that can act on a single instruction at any given time. They are just like multiprocessor systems having parallel computing architecture. Following is the architecture of SIMD −

The best example for SIMD is the graphics cards. These cards have hundreds of individual processing units. If we talk about computational difference between SISD and SIMD then for the adding arrays [5, 15, 20] and [15, 25, 10], SISD architecture would have to perform three different add operations. On the other hand, with the SIMD architecture, we can add then in a single add operation.

The advantages of SIMD architecture are as follows −

The disadvantages of SIMD architecture are as follows −

Systems with MISD stream have number of processing units performing different operations by executing different instructions on the same data set. Following is the architecture of MISD −

The representatives of MISD architecture do not yet exist commercially.

A normal multiprocessor uses the MIMD architecture. These architectures are basically used in a number of application areas such as computer-aided design/computer-aided manufacturing, simulation, modeling, communication switches, etc.

While working with the concepts like concurrency and parallelism, there is always a need to speed up the programs. One solution found by computer designers is to create shared-memory multi-computers, i.e., computers having single physical address space, which is accessed by all the cores that a processor is having. In this scenario, there can be a number of different styles of architecture but following are the three important architecture styles −

In this model, all the processors share the physical memory uniformly. All the processors have equal access time to all the memory words. Each processor may have a private cache memory. The peripheral devices follow a set of rules. 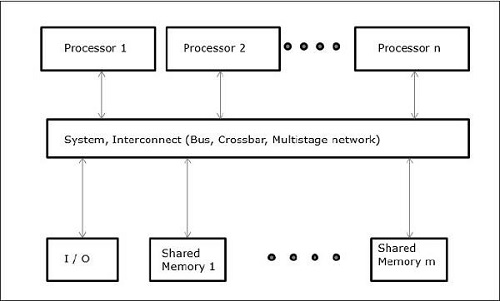 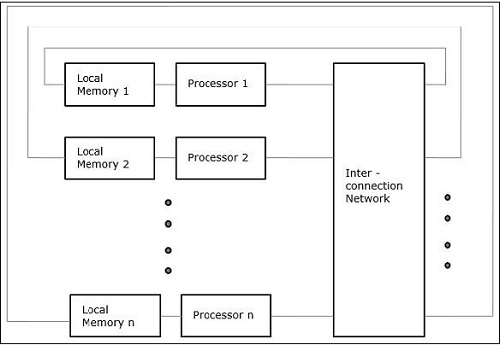 The COMA model is a specialized version of the NUMA model. Here, all the distributed main memories are converted to cache memories.