This process enables a quick feedback cycle that isn’t possible in most other languages.

A REPL session can be started in Leiningen by typing the following command in the command line.

This will start the following REPL window.

You then start evaluating Clojure commands in the REPL window as required.

To start a REPL session in Eclipse, click the Menu option, go to Run As → Clojure Application. 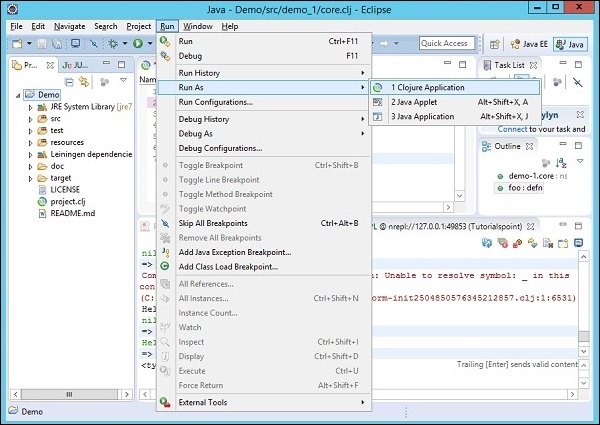 This will start a new REPL session in a separate window along with the console output. 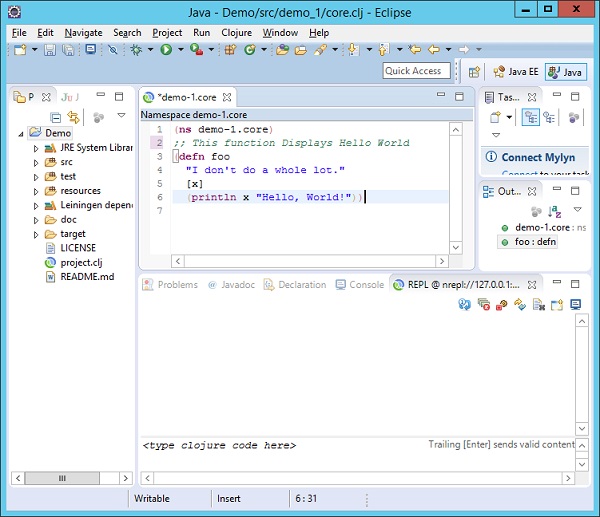 Conceptually, REPL is similar to Secure Shell (SSH). In the same way that you can use SSH to interact with a remote server, Clojure REPL allows you to interact with a running Clojure process. This feature can be very powerful because you can even attach a REPL toa live production app and modify your program as it runs.

REPL includes some useful variables, the one widely used is the special variable *1, *2, and *3. These are used to evaluate the results of the three most recent expressions.

Following example shows how these variables can be used.

In the above example, first two strings are being sent to the REPL output window as “Hello” and “World” respectively. Then the *2 and *1 variables are used to recall the last 2 evaluated expressions.