Robotic limbs have been around for a while; and with the ongoing new technologies and innovations, have been able to get better in motion and strength. The latest development in robotic limbs is that of the ‘click-on arm’ prosthesis.

There have been other mind-controlled robotic devices used for patients with severe disabilities either due to neuro-degenerative diseases or accidents. But for these robotic devices, the brain is implanted with chips to enable the movements of robotic arms. The click-on prosthetic device has been applied to legs and been around for a while now (since 2009); however, it has been used on the hand for the first time, thereby allowing the patient to manage and control the prosthesis through their mind (thoughts). New developments have also catered to removing issues such as infections, slip offs and other skin problems which occur due to these artificial limbs.

What is a Prosthetic Device?

Prosthesis/prosthetic device or robotic limb is an artificial device which is used to replace a missing hand, leg, dental or other parts of the body which may have been lost due to a disease or accident. These artificial limbs look as natural as the normal body part (arm, foot etc.); and usually possess a few common features such as shaft, hooks, socket for fitting the amputated limb, suspension to hold the limb and a cosmetic covering. It does take a while for rehabilitation though. The patient also needs to get used to become comfortable with the new body part and begin to manage daily activities all by oneself.

The click-on prosthesis has been used in Netherlands by Surgeon Jan Paul Frölke and rehabilitation physician Henk van de Meent. With the help of technological innovations, it has been possible to connect the artificial limb to work with the help of thoughts. Much like a real limb, this artificial limb is made to feel closer to the body as the brain (like the natural limb) is constantly talking to this artificial one. The movements for the arm fitted with the device are usually made with the shoulder. 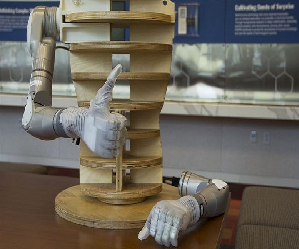 Till now, many people have given up on artificial limbs as they didn’t feel connected to it. But with this new technology, it has been made possible to deal with the patients’ response problem. There have been others such as Boston Digital Arm, John Hopkins University’s Proto 1 and Proto 2 for allowing movements in the prosthetic device. However, this is the first time that a device is being clipped precisely to the bone.

In the entire procedure, the nerves that control the hand muscles and the underarm are fastened to parts of the muscles in the upper arm stump. These muscles go on to strengthen the neural signals as the nerves now become connected to (grow into) the muscles. The patient can begin to imagine the opening and closing of their hand to directing the new limb. These impulses are received/felt via the blue tooth – Myoband, an electrode ring, is attached to a bracelet that receives the signals, detects them from the muscles, sends it to the blue tooth, finally reaching a small computer attached to the arm, and passing on the signal for the hand to do what the person (mind) wishes. Also, during the rehabilitation process, the patient learns to use his thoughts for contracting the muscles in the upper arm. This feels a whole lot real when the nerves connect to the patient’s arm muscles and the arm functions as desired, while also making the person feel as normal as can be.

John Baggerman of The Netherlands is one of the very few in the world to have received this highly innovative robotic arm. His arm had been amputated in a truck accident in 2010. Three surgeries were conducted to give him the modern click-on robotic arm.

Getting used to doing daily chores with a robotic arm is one thing; but being able to use it with just thoughts is an absolutely special and elevated level of sentiment.