We must have knowledge of the basic terms used in CICS to get a better understanding of how it works. Application programs use CICS for communication with remote and local terminals and subsystems.

The CRT monitor displays the output or the input fields of the application program. A screenshot of a 3278 Model of CRT monitor is shown below. It has the following characteristics − 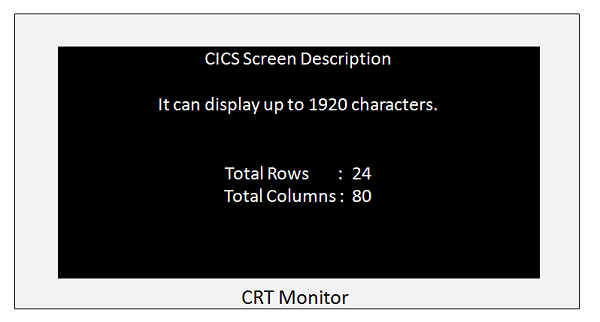 A CICS program is invoked through a transaction. A CICS transaction is a collection of logically related programs in an application. The whole application could be logically divided into several transactions.

A Task is a unit of work which is specific to a user.

The difference between a transaction and a task is that several users can invoke a transaction but each user initiates his own task.

An application is a series of logically grouped programs to form several transactions which is used to complete a specific task for the end-user.