The master of microcomputer system is the microprocessor since all the operations of a computer are controlled by the microprocessor, the control unit often called as (CU) is found in the microprocessor. In the microcomputer system apart from processor there are several chips of RAM, CHIPS of EPROM and other Input Output port chips, timer 8253 is also present. But surprisingly at any moment of time the remains with only one of the chip. By activation of the chip selection the processor, the selection of the chip of the processor is done. Hence except the processor all chips must have more than one input pins for selection of chips. The chip which selects the pin can be either in actively low state or in actively high state. It completely depends on the designer who designs the chip, nothing can be done with the user. We call the chip select line a device select line. Let’s for example there are three chip select pins in 74138. In a RAM chip pin details and address 2K x 8 RAM chip signifies (2*1024=2048) memory locations having information of 8 bits. In the selection process of the chip user play no roles in selecting. The processor is meant for carrying the task. For the communication and other sorts of interaction purpose the user plays a tremendous role in the interaction procedure. The designer of the chip here plays a vital role in the entire process. Every chip has more than one input pins except the processor. So this is the entire selection process is perhaps dependent or we may call it as independent. The designer of chip plays an important role in this process of chip design process. 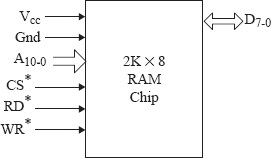