Bluetooth is a network technology that connects mobile devices wirelessly over a short range to form a personal area network (PAN). They use short-wavelength, ultra-high frequency (UHF) radio waves within the range 2.400 to 2.485 GHz, instead of RS-232 data cables of wired PANs.

There are two types of Bluetooth networks −

Communication can take place between a master node and a slave node in either one-to-one or one-to-many manner. However, no direct communication takes place between slaves. Each station, whether master or slave, is associated with a 48-bit fixed device address.

Besides the seven active slaves, there can be up to 255 numbers of parked nodes. These are in a low power state for energy conservation. The only work that they can do is respond to a beacon frame for activation from the master node.

A scatternet is an interconnected collection of two or more piconets. They are formed when a node in a piconet, whether a master or a slave, acts as a slave in another piconet. This node is called the bridge between the two piconets, which connects the individual piconets to form the scatternet. 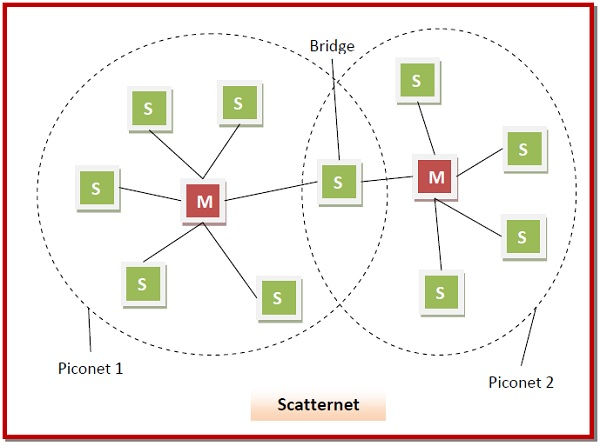