As we have already discussed, Bitcoin is a virtual currency made up of 0s and 1s. They are collected and stored in a software portfolio called a wallet. A wallet identifies amount of cryptocurrency with unique addresses that are used to send and receive money.

A cryptocurrency wallet is a digital wallet that is used to store and transact in different cryptocurrencies. The crypto wallet doesn't exactly "store" the currency as real-world wallets do. Instead, it stores public and private keys which help in sending and receiving money. Bitcoin owners save bitcoins in either an online wallet or a paper wallet which are similar to a physical wallet. Wallet holds keys to each bitcoin, securing them and preventing any fraud.

What are public and private keys?

The public key is the address to which others can send you the money, while the private key is that which you will use to send money to anyone. It is important that ONLY you should know your private key; otherwise anyone who knows your private key can steal your money.

As of now, let us discuss two methods of storage that can be used to store crypto money; hot storage, and cold storage.

Opening a wallet is fairly simple; one can download free and paid bitcoin wallets from internet. Some deal only in bitcoins while others handle multiple cryptocurrencies.

A Bitcoin wallet is simply an app, software, website, or device that manages Bitcoin private keys for you.

A paper wallet is a piece of paper on which the public address and private address are printed, usually in the form of QR code. Public address is used to receive bitcoins, and the private address is used to send or transfer the bitcoins stored at that address. The paper wallet should be used securely and not revealed or lost. The paper wallet can be generated by using services like Bitcoinpaperwallet or Bitaddress, and then can be printed out.

These are software apps available on mobile phones, desktops, laptops or websites that allow bitcoin transactions.

For those people who use Bitcoins frequently, paying for goods and services, a mobile bitcoin wallet is a necessary tool. A mobile app runs on your smartphone, has your private keys and allows making payments directly from your phone.

A full Bitcoin client would require access to the complete Blockchain ledger, which needs several gigabytes of storage. Therefore, mobile wallets use simplified payment verification (SPV) technology which works with very small subsets of the Blockchain. In spite of being a convenient on-the-go solution for Bitcoin transactions, mobile wallets are very susceptible to hacker attacks and also if the mobile is lost, others can access the wallet.

Hot wallets are like your physical wallets which you use to store some cash, but not your life savings. Hot wallets are useful if you make frequent and small payments, but are not suitable to store a large amount of bitcoins.

Software wallets allow us to send and receive bitcoins and are mostly free. There are some paid software wallets which provide some extra value-added services.

In Coinbase, we can create multiple wallets which is a great way to organize the record of your expenses and savings. By default, there are following wallets in Coinbase, namely, Bitcoin BTH wallet, Bitcoin Cash BCH wallet, Ethereum ETH Wallet and Litecoin LTC Wallet. You have a wallet in US dollars as well so that you can buy and sell the cryptocurrencies using US dollars.

Each account on Coinbase is a bunch of addresses. New addresses are generated for each transaction on Coinbase automatically and stay mapped with your account forever and it is secure to reuse them. 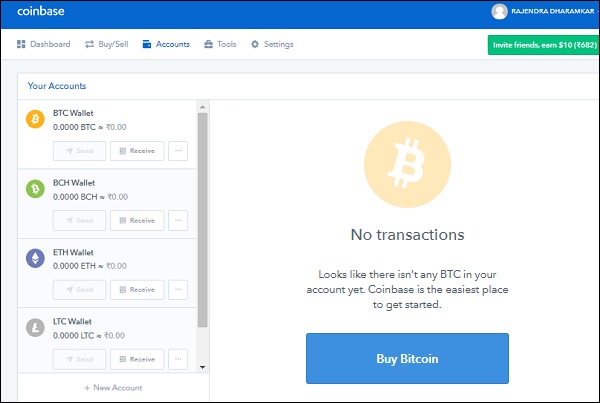 Each wallet account is associated with an address and QR code as displayed. For example, selecting bitcoin wallet and then clicking on the BTC wallet address shows below address along with its QR code. 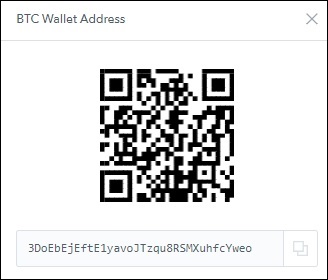 We can download bitcoin software client which might take a few hours to download all blocks to our computer that now acts as a node in the network. We have to ensure that there is enough bandwidth and storage for full block chain size which is over 145 GB. It is also possible to use a wallet without downloading the bitcoin client.