Binary Countdown Protocol is a collision-free protocol that operates in the Medium Access Control (MAC) layer of the OSI model. In computer networks, when more than one station tries to transmit simultaneously via a shared channel, the transmitted data is garbled, an event called collision. Collision-free protocols resolves channel access while the stations are contending for the shared channel, thus eliminating any possibilities of collisions.

In a binary countdown protocol, each station is assigned a binary address. The binary addresses are bit strings of equal lengths. When a station wants to transmit, it broadcasts its address to all the stations in the channel, one bit at a time starting with the highest order bit.

The iterative steps are −

The procedure is illustrated as follows − 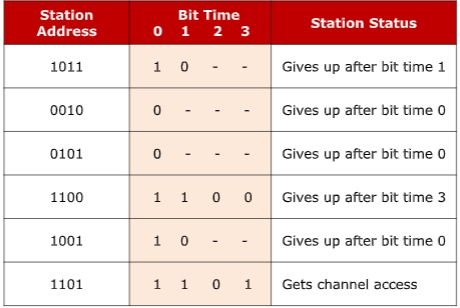