Amer Fort is situated in the Amer town which is at the distance of 11 km from Jaipur. The Amer town was firstly occupied and administered by Meenas. As they worshipped Goddess Amba, so on that basis they named the place as Amer or Amber. Goddess Amba was also known as Gatta Rani or Queen of Pass. History says that Amer town was previously known as Khogong which was ruled by Raja Ratun Singh or Alan Singh Chanda.

As Dhola Rae was an infant, his mother felt that the usurper may kill her and the child so she put the child in a basket and reached near Khogong which was ruled by Meenas. Being hungry she was plucking wild berries. Seeing a snake near the basket she screamed but a Brahmin saw and told that the baby has a very bright future.

He took her to Khogong where she asked the king to give her some employment for survival. The queen included her in her slaves. One day, as per the order, she cooked food which was liked by the king. When he listened her story, he adopted her as sister and Dhola Rae as his nephew. Dhola Rae was sent to Delhi at the age of 14 and he returned after five years.

The Kachwaha Rajputs returned with Dhola Rae and as per their conspiracy, they killed many of the royal people and the public during the celebration of Diwali festival. In this way, the Kachwahas overtook the town from the Meenas. The first king of the Kachwahas was Raja Kakil Dev who made Amer town his capital in 1036AD. The construction of the fort was started by Raja Man Singh in 967AD and was expanded by Raja Jai Singh I. The fort was improved by many other rulers who succeeded Jai Singh I. Jai Singh II shifted his capital from Amer town to Jaipur.

Raja Jai Singh I and II

Jai Singh I and Man Singh started the construction of Amer Fort. Jai Singh I also was the commanding officer of Mughal army and fought many battles for Jahangir, Shah Jahan, and Aurungzeb. After Jai Singh I, three more rulers succeeded him. After that Raja Jai Singh II succeeded and he also impressed Aurungzeb. Due to this, Aurungzeb gave him the title of Sawai which means one and a quarter. 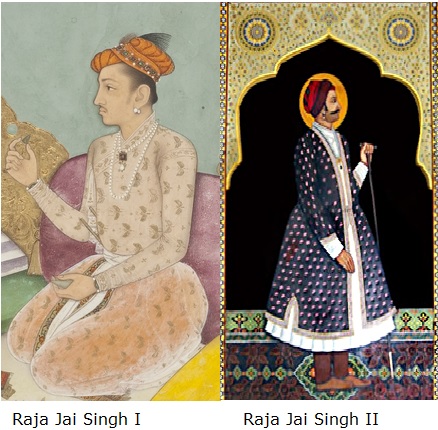 Since he has close bonds with the Mughals, so he started the construction of his dream city Jaipur with the help of Vidyadhar Bhattacharya. The city was divided into seven blocks having buildings and trees. There were high walls having ten gates to enter the city. The placement of shops was divided into nine sectors called chokris.

The structures built by the Meenas were demolished by the Kachwahas to make their structures. The fort includes halls, palaces, temples, and many other structures. People can reach the fort through their vehicles or they can ride elephants for the purpose.