Bluetooth communication networks are prone to signal interferences in environments where other wireless networks coexist. The problem is aggravated when they use the same frequency bands. Bluetooth technology and IEEE 802.11 networks, like Wireless LANs (WLANs) and WiFi, operate in the same unlicensed 2.4 GHz ISM (Industrial, Scientific, and Medical) radio band. In order to reduce the impact of these interferences, Adaptive Frequency Hopping (AFH) was introduced by Bluetooth Special Interest Group (SIG).

In Adaptive Frequency Hopping, when a Bluetooth device is introduced in the network, it identifies the channels that are presently fixed for communication by WiFi or WLANs. It then re-maps the available channels for communication by eliminating the already fixed channels from the total allotted channels. The device starts to send data packets along the available channels avoiding collisions with the data packets that are being sent via the fixed channels. The process is shown in the following diagram − 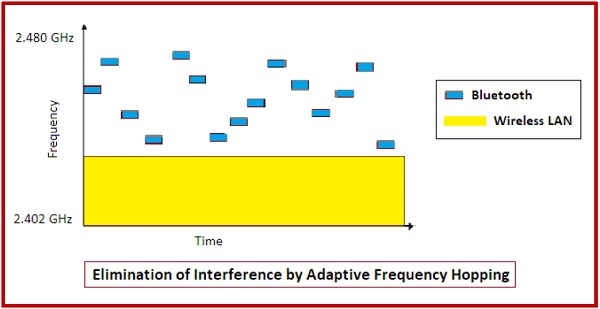 However, the process reduces the number of available channels for Bluetooth communications, particularly if the network load of WLANs is high. Bluetooth specifies a minimum requirement of at least twenty channels. In order to identify used or bad channels, two methods are generally used, namely, RSSI (Received Signal Strength Indication) and PER (Packet Error Rate).