This guide presents the seven fundamental Software Testing Principles that any software tester and quality assurance professional should understand.

When performing software testing, one must achieve optimal test results without straying from the target. But how do we know if we are using the best research strategy? To do so, we must adhere to certain fundamental research standards.

Consider the following circumstance: we are transferring a file from Folder A to Folder B. Consider all of the many ways by which we can test this.

Aside from the standard examples, you can also put the following conditions to test−

If you tested every possible mix, the project's Processing Time & Expenses will skyrocket. So, we require such concepts and techniques that are needed to enhance the research while optimizing the effort.

Here are the 6 Principles

1. Exhaustive testing is not possible

Well, indeed! It is not necessary to do exhaustive research. Instead, we need the least amount of research possible depending on the application's risk evaluation.

The most important question is, how to calculate this potential danger? Let's have an experiment to resolve this.

Which activity, in your view, is most probable to provoke your operating system to collapse?

I hope all of you have guessed it right and that is, opening ten separate applications simultaneously.

So, if you were testing this Operating System, you would notice that bugs are most likely to be detected in multi-tasking activities and must be carefully tested, which takes us to our next concept, clustering of flaws.

According to defect clustering, the majority of the defects found are contained in a limited number of units. The Pareto Principle is applied to software testing in this way: roughly 80% of the issues are identified in 20% of the units.

These problematic modules can be identified by practice. However, there are several drawbacks to this strategy.

If the same experiments are conducted repeatedly, the same test cases will inevitably cease to detect new glitches.

Repetitious use of the same pesticide combination to kill insects while farming can result in the insects gaining pesticide immunity over time, thus making the pesticides useless against insects. The same is true with software testing. If the same series of repeated checks are performed, the procedure would be ineffective for detecting new faults.

To resolve this, the test cases must be tested and updated on a regular basis, with new and varied test cases included to discover new flaws.

Testers cannot rely solely on current test methods. They must constantly strive to refine current techniques in order to make the research more efficient. However, even with all of the hard work in research, one can never say that their end-result is bug-free. To emphasize this point, let's highlight the disastrous Windows 98's public introduction program. The OS crashed as the speaker was demonstrating the OS to the public in the launch event. Do you think a corporation like Microsoft would not have carefully checked their operating system and would endanger their prestige just to have their operating system fail during the public launch?

The testing philosophy says that - Testing discusses the existence of defects but not the lack of it. That is, Software testing decreases the likelihood of unexplored faults existing in a software, but even though no flaws are detected, this is not evidence of 100% accuracy.

But what if you work super hard, taking all care, to ensure that the tech product is bug-free? And the program does not fulfill the clients' demands and expectations.

This brings us to our next theory, which says that the absence of error is important.

Testing should begin early in the Software Development Life Cycle so that any flaws in the specifications or design phases are discovered early on. It is also less expensive to patch a flaw in the early phases of testing. But when does one begin testing? It is advised that you begin looking for bugs as soon as the specifications are specified.

Myth: 'Principles are just guidelines. They can not be practically implemented.'

This is completely false. Test Principles will assist you in developing a successful Test Strategy and writing error-catching test cases. However, mastering the testing concepts is similar to learning how to drive for the very first time.

When you first start learning to drive, you pay close attention to everything, such as gear changes, rpm, clutch handling, and so on. However, with practice, you just need to concentrate on driving and the rest will come naturally. So much so that you're also conversing with other people in the car.

The same is true for principles of testing. Experienced testers have internalized these ideas to the point that they adopt them without ever worrying about them.

The V Model is a highly organized SDLC model that includes a testing period in addition to each production phase. The V model is an evolution of the waterfall model in which research is performed on every stage concurrent with design and development sequentially. It's referred to as the Validation or Verification Model.

Example to Understand the V Model

Assume you've been tasked with developing custom applications for a customer. Regardless of your technical experience, you would take the following sequence of actions to complete the mission.

This is what is known as the waterfall method of the software development lifecycle.

Problem with the Waterfall Model

As you can see, testing in the model begins only after installation is complete.

However, if you're working on a big project with dynamic structures, it's possible to overlook important information during the gathering process. In both situations, the customer may get a completely incorrect product, and you may have to restart the task. Instead, if you correctly mention the specifications but make significant errors in the testing design, you may have to restart the work. To fix the flaw in the creation and design of your applications, you will have to rebuild the whole software.

Thousands of project evaluations have shown that faults incorporated during specifications and construction account for over half of the overall number of errors.

Furthermore, the costs of repairing a fault rise over the development lifecycle. The earlier in the life cycle a flaw is discovered, the less expensive it is to repair it. "A stitch in time saves nine," as the saying goes.

To resolve this issue, the V model of testing was introduced, in which each step of the Development life cycle corresponds to a testing phase. 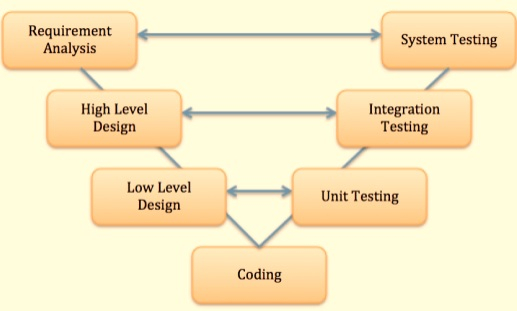 This image is necessary to show you why it is called "the V-model".

Aside from the V model, there are iterative development models in which development is done in stages, with each step adding features to the program. Each process includes its own series of implementation and testing exercises.

There are various models for the development life cycle. The development model chosen for a project is determined by the project's objectives and priorities.