XML tags identify the data and are used to store and organize the data, rather than specifying how to display it like HTML tags, which are used to display the data. XML is not going to replace HTML in the near future, but it introduces new possibilities by adopting many successful features of HTML.

A short list of XML usage says it all −

Following example shows how XML markup looks, when embedded in a piece of text −

This snippet includes the markup symbols, or the tags such as <message>...</message> and <text>... </text>. The tags <message> and </message> mark the start and the end of the XML code fragment. The tags <text> and </text> surround the text Hello, world!.

Is XML a Programming Language?

A programming language consists of grammar rules and its own vocabulary which is used to create computer programs. These programs instruct the computer to perform specific tasks. XML does not qualify to be a programming language as it does not perform any computation or algorithms. It is usually stored in a simple text file and is processed by special software that is capable of interpreting XML. 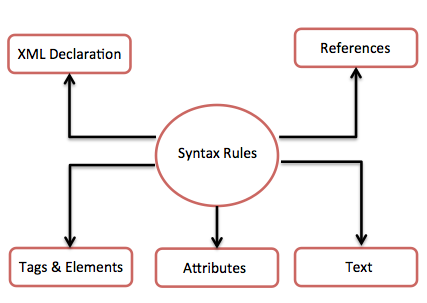 An XML document is a basic unit of XML information composed of elements and other markup in an orderly package. An XML document can contains wide variety of data. For example, database of numbers, numbers representing molecular structure or a mathematical equation.

A simple document is shown in the following example −

The following image depicts the parts of XML document.

Document Prolog comes at the top of the document, before the root element. This section contains −

Document Elements are the building blocks of XML. These divide the document into a hierarchy of sections, each serving a specific purpose. You can separate a document into multiple sections so that they can be rendered differently, or used by a search engine. The elements can be containers, with a combination of text and other elements.

Each parameter consists of a parameter name, an equals sign (=), and parameter value inside a quote. Following table shows the above syntax in detail −

An XML declaration should abide with the following rules −

XML declaration with no parameters −

XML declaration with all parameters defined −

XML declaration with all parameters defined in single quotes −

Let us learn about one of the most important part of XML, the XML tags. XML tags form the foundation of XML. They define the scope of an element in XML. They can also be used to insert comments, declare settings required for parsing the environment, and to insert special instructions.

We can broadly categorize XML tags as follows −

The beginning of every non-empty XML element is marked by a start-tag. Following is an example of start-tag −

Every element that has a start tag should end with an end-tag. Following is an example of end-tag −

Note, that the end tags include a solidus ("/") before the name of an element.

The text that appears between start-tag and end-tag is called content. An element which has no content is termed as empty. An empty element can be represented in two ways as follows −

A complete empty-element tag is as shown below −

Empty-element tags may be used for any element which has no content.

XML tags are case-sensitive. Following line of code is an example of wrong syntax </Address>, because of the case difference in two tags, which is treated as erroneous syntax in XML.

Following code shows a correct way, where we use the same case to name the start and the end tag.

XML elements can be defined as building blocks of an XML. Elements can behave as containers to hold text, elements, attributes, media objects or all of these.

Each XML document contains one or more elements, the scope of which are either delimited by start and end tags, or for empty elements, by an empty-element tag.

Following is the syntax to write an XML element −

name is followed by an = sign and a string value inside double(" ") or single(' ') quotes.

An empty element (element with no content) has following syntax −

Following rules are required to be followed for XML elements −

An XML attribute has the following syntax −

where attribute1 and attribute2 has the following form −

value has to be in double (" ") or single (' ') quotes. Here, attribute1 and attribute2 are unique attribute labels.

Attributes are used to add a unique label to an element, place the label in a category, add a Boolean flag, or otherwise associate it with some string of data. Following example demonstrates the use of attributes −

Attributes are used to distinguish among elements of the same name, when you do not want to create a new element for every situation. Hence, the use of an attribute can add a little more detail in differentiating two or more similar elements.

In the above example, we have categorized the plants by including attribute category and assigning different values to each of the elements. Hence, we have two categories of plants, one flowers and other shrubs. Thus, we have two plant elements with different attributes.

You can also observe that we have declared this attribute at the beginning of XML.

Following are the rules that need to be followed for attributes −

This chapter explains how comments work in XML documents. XML comments are similar to HTML comments. The comments are added as notes or lines for understanding the purpose of an XML code.

Comments can be used to include related links, information, and terms. They are visible only in the source code; not in the XML code. Comments may appear anywhere in XML code.

A comment starts with <!-- and ends with -->. You can add textual notes as comments between the characters. You must not nest one comment inside the other.

Following example demonstrates the use of comments in XML document −

Any text between <!-- and --> characters is considered as a comment.

Following rules should be followed for XML comments −

"The document entity serves as the root of the entity tree and a starting-point for an XML processor".

This means, entities are the placeholders in XML. These can be declared in the document prolog or in a DTD. There are different types of entities and in this chapter we will discuss Character Entity.

Both, HTML and XML, have some symbols reserved for their use, which cannot be used as content in XML code. For example, < and > signs are used for opening and closing XML tags. To display these special characters, the character entities are used.

There are three types of character entities −

They are introduced to avoid the ambiguity while using some symbols. For example, an ambiguity is observed when less than ( < ) or greater than ( > ) symbol is used with the angle tag (<>). Character entities are basically used to delimit tags in XML. Following is a list of pre-defined character entities from XML specification. These can be used to express characters without ambiguity.