What is the Hub?

A hub is a standard network point, also referred to as a network hub, to connect devices in a network. The hub has numerous ports. If a packet makes one port, it can be viewed by all the network segments because a packet is duplicated to another port. Hub is a unique device used to enhance a network by enabling increased workstations in the network. 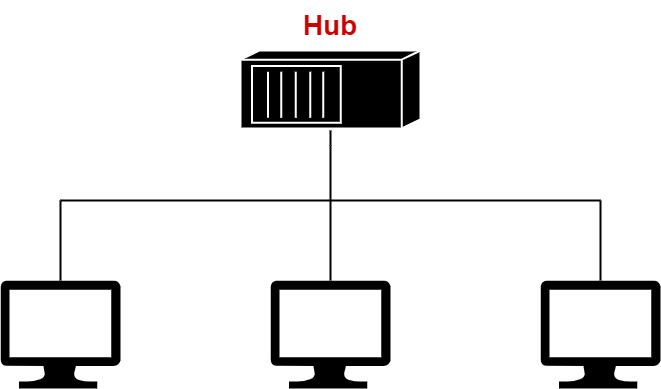 There are three types of hubs which are as follows −

Passive hubs do not include any computerized elements, and they do not procedure the data signal at all. The main goal of a passive hub is to connect the signals from various network cable segments. All device connected to a passive hub takes all the packets that develop through the hub.

The hubs that contain repeating capabilities to strengthen the signals in a network are called active hubs. The limitation of active hubs is that they magnify noise along with the signals. They are a little smarter than passive hubs because they boost the signals before passing them between nodes to the node.

These hubs are also called smart hubs. They have a special kind of software in them to perform management functions in the network. The software offers them the capability to find and separate network issues. Thus they have both monitoring and management capabilities.

These hubs do not have much importance in smaller networks with a few nodes, but as the network expands, its problems and management need also increase, and in those networks, such hubs are proved to be an asset.