What is the effect of errors in Error Detection?

There are a few effects of errors which are as follows −

Attenuation: Due to error, the signal may get attenuated, i.e., the data may be costly in the extreme case.

Delay Distortion: Due to this error at the receiving end, the wave is distorted due to a delay in transmission.

Interference in voice communication can occur due to an error in the signal.

Echo can be produced because the sender cannot hear the receivers answer or voice.

Cross talk can occur because of the error in the broadcasted signal. Due to this, the faint voice of another party may disturb your signal.

Data Transfer Rate: The rate of information exchange between two communication systems is called DTR. It is measured in bbs (bits per media) and is different for different transmission media, i.e., DTR depends upon transmission and transmitter and its interfacing with communicating devices.

The DER is the total amount of error bits or erroneous frames out of whole transmitted bits or framed. Thus we can say that DER directly depends on the DTR.

In this process, the errors are detected only, not corrected.

Prob that a bit is taken in error is called BER (Bit error rate).

Prob that a frame appears with no bit errors.

Prob that with an error detecting algorithm in use, a frame appears with an additional undetected error.

F is the number of bits per frame. The probability that a frame appears with no bit errors reduces when the prob of an individual bit error improves, as we will predict. 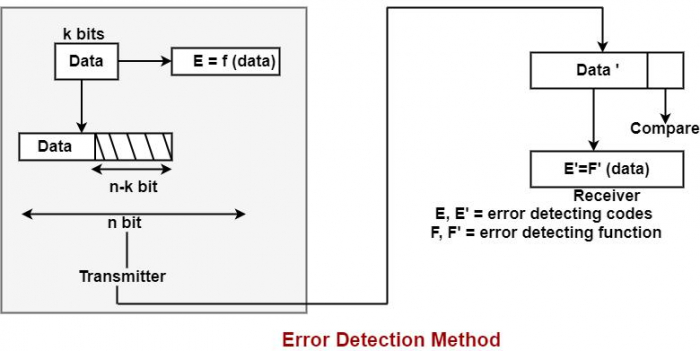