What is FDDI in the Computer Network?

FDDI stands for Fiber Distributed Data Interface. It is a collection of ANSI and ISO standards for data transmission on fiber-optic lines in a local area network (LAN) that can broaden in the range up to 200 km (124 miles). The FDDI protocol depends on the token ring protocol.

FDDI cabling consists of two fiber rings, one transmitting clockwise and the other transmitting counterclockwise. Fiber Distributed Data Interface (FDDI) is generally implemented as a dual token-passing ring within a ring topology (for campus networks) or star topology (inside a building). The dual ring includes a primary and secondary ring.

The primary ring transport data. The counter-rotating secondary ring can hold data in the opposite direction but is more frequently reserved as an alternative in case the primary ring goes below. This supports FDDI with the cost of fault tolerance essential for network backbones.

FDDI allows nodes to connect to the network by means of a single cable, such nodes are called single attainment (SAS), and their dual-connected counterpart is called dual attachment station (DAS). 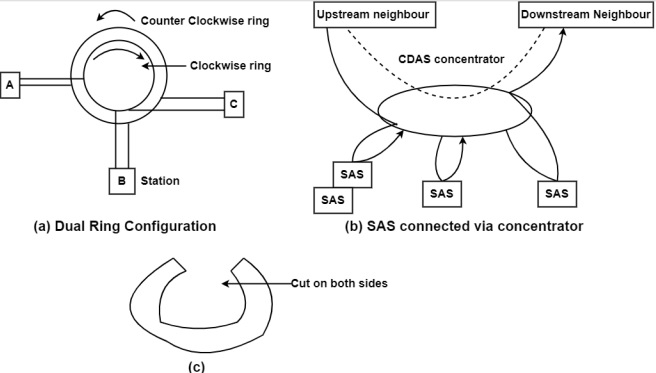 There are two types of traffic in FDDI, which are as follows−

In the FDDI mechanism, Token is always in circulation & different from 802.5. All rings on FDDI monitor that token is not lost. FDDI MAC protocol uses three timers as the first one is holding a timer to determine how long a station may-continue to transmit once it has acquired a token.

The second rotation timer is restarted every time the token is seen. If the timer expires, it means that the one has not been sighted for two Rings on interval or has been lost. The third timer is the transmission timer used to time out and recover from certain transient ring errors.