What is cellular network communication?

It is not a complete wireless technology because the cellular network refers to a large area of mobile networks that is used for network access.

A mobile device is linked to its base station using an air-based interface and also using a physical and link layer protocol.

Every base station is connected to the Mobile Switching Centre to help set up a call and mobility network by connecting mobile phones to wide area networks. Whereas, devices used in wireless networks are used to access the internet.

For example, wireless fidelity is a network device used to connect to the WLAN network to access the internet and a wireless access point, AP.

Cellular networks rely on the availability of network ranges and Wi-Fi has a limited range.

Step 1 − When we turn on the cell phone, the Control Channel seeks to get the SID (System Identification Number).

Step 2 − The Control Channel is a special frequency used by the phone and base station to communicate with each other.

Step 3 − If the cell phone finds it difficult to get a connection to the control channel, a "no service" message is shown.

Step 4 − If the SID is accessed from the cell phone, it compares the SID to the SID programmed on the phone. If both SID's match, the phone recognises the portion of its home system as the cell it communicates with.

Step 5 − The handset, along with the SID, also transmits a registration request and the MTSO (Mobile Telephone Switching Office) keeps track of the location of your phone in a database. When it needs to ring the phone, MTSO understands which cell you are in.

Step 6 − Then, the MTSO gets the signal and tries to locate the phone. In its database, the MTSO searches to find the cell in which the phone is stored. To take the call, the MTSO then chooses a frequency pair.

Step 9 − By means of the MTSO, the two base stations coordinate themselves. At some level, on a control channel, the cell phone gets a signal and guides it to change frequencies. This will make the phone move to a new cell.

The diagram for cellular network communication is given below − 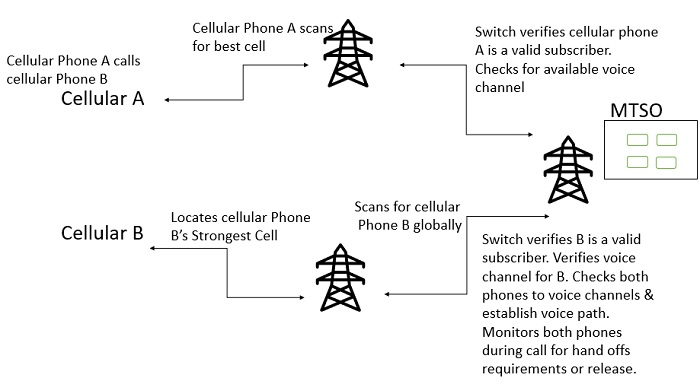